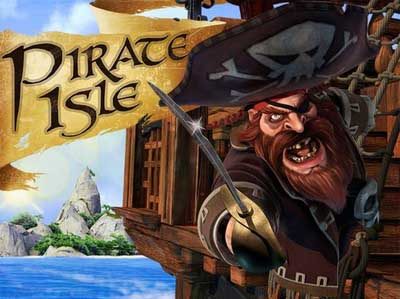 Pirate Isle is an online slot game by software developer RTG and it takes you straight aboard the pirates’ ship. This has to be on the list of RTG’s most entertaining offerings yet and among other things, that is also greatly due to the visuals. They are of high quality, have nice character and come together to conjure up this thrilling atmosphere of adventure. They also have the cool 3D effect that makes them all the more appealing in the world of modern slot games. But it’s not just that alone, of course. As you will soon see, the title comes with plenty of other extras. And as for the backdrop here, it also contributes to the authenticity of the whole pirate experience. It’s actually the ship itself, from your perspective as a crew member. You’ve got all the fine details, such as the steps and lanterns, as well as the barrels full of rum and ammunition. 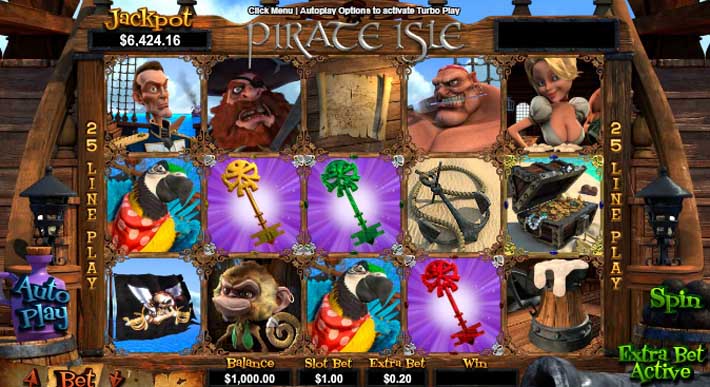 Now as for the symbols on these reels, they start off with the lower value icons of a treasure map, a pint of ale and the ship’s wheel. Next in line is the massive canon, after which we have a symbol depicting an anchor. Then the value rises further up for the mid and higher paying symbols. These include a very charming monkey and a sly parrot. After that we have what appears to be a captive officer of the navy, who will soon be walking the plank from the looks of things. Next is a bulky, mean pirate with a knife in his mouth, following whom is a full-breasted woman. Then last but not least is the ship’s flag and her fierce captain – traditionally, with an eye patch and big bushy beard. This brings us to the game’s layout, which features 5 reels and 3 rows. The total number of paylines in this slot is 25 paylines and, unusually for this developer, they are fixed. The betting range isn’t too wide, though. Your possible betting opportunities span from 25c per spin up to a total of $6.25 per single spin.

Pirate Isle comes with a whole bunch of special symbols and a number of exciting features to go with them. First in line is the skeleton key symbol, which actually has a skull with red eyes on it. This is the game’s Wild symbol, which can only appear on reel 3. And as such, the Wild has the capability of replacing any of the regular symbols on these reels. Thus, it will be able to help create winning combos and increase your winnings. In addition, it will also double the payouts for any winnings sequence it helps complete. However, the Wild cannot replace the game’s Scatter symbols.

There are two Scatters in this title, one of which comes in the form of a treasure chest. The second one pictures the Galleon and is the more lucrative of the two. Now, the Treasure Chest Scatter will trigger the freespins round, if you can land at least 3 of these symbols at the same time. This will award you up to a whopping 300 freespins and possibly up to 150x multiplier. The Galleon Scatter, on the other hand, has another feature to offer. Landing 3, 4 or 5 of these on the reels simultaneously will trigger the Broadside feature. As a result, you will get to enter a new screen and take out all the pirate anger you have in you on other ships. Sink as many as you can, in order to climb the prize ladder. You can even potentially score the jackpot in this feature.

Another thing to keep an eye out for are the colorful jewel skeleton keys that can appear anywhere on the reels. They come in a total of five different bright colors, making them very difficult to miss. These are diamond, ruby, sapphire, emerald and gold. The diamond key is the most lucrative of the whole bunch. And you will be looking to form winning combinations with jewel keys of the same color. Landing at least 3 of them on an active payline will also trigger a freespins round. And note that throughout the duration of the freespins bonus, the Wild Skeleton Keys can appear in stacks on reels 2, 3 and 4.

Pirate Isle is packed with features, as you can tell. So, at first it may even seem like it’s a little too much. But things will align very quickly once you start spinning the reels. The great thing is that you have both amazing visuals, as well as a very fun, interactive setup to entertain you from start to finish. There are very fun animated sequences here and there, treasure maps, ghosts, and staggering prizes to win above all. However, this is a very volatile offering, so be sure to keep an eye on your bankroll. And know that triggering these bonuses won’t necessarily be a piece of cake.