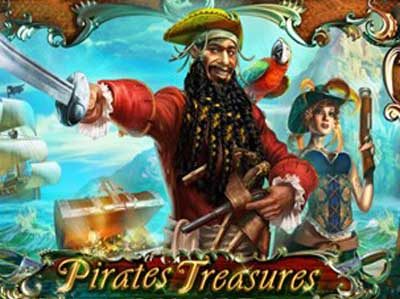 If you’re a fan of classic adventure slot themes, Pirates Treasures Deluxe by online slots developer Playson may be just the thing for you. The exciting world of 19th century piracy comes to life on these reels. The backdrop here features the stormy waters of the open sea, but it’s not particularly aided by the game’s soundtrack, though. You will notice that the graphics here aren’t quite high definition either, but they still manage to represent the theme quite nicely. As for the symbols, they include a few of the low value card icons: A, K and Q. Following them are a nautical compass, a canon, a parrot and a couple of pirate character symbols.

As far as the layout goes, there are 5 reels and 3 rows in Pirates Treasures Deluxe. The number of paylines is an unusual one, but we have seen it in a number of other slots by this provider. There are 21 paylines here in total. The available betting range is pretty flexible and starts at only 21p per spin, if you play with the maximum number of lines. Maximum stakes reach up to a total of £105 per spin. The RTP of Pirates Treasures Deluxe is 96.60%.

Pirates Treasures Deluxe has several special symbols in store for players, the first of which is its Wild symbol. It comes in the shape of none other than easily the most infamous of all known pirates – Blackbeard. This terror of the seas can stand in for any of the regular icons on the reels to help create winning combos. What’s more, it is also the most valuable symbol and can appear in any position on the screen. However, it cannot substitute for the Bonus and Scatter symbols.

The Scatter comes in the shape of a Treasure chest and will be responsible for activating the freespins feature. Like the Wild, it can also appear in any position on the reels. But to benefit from it the most, you will need get at least 3 of it anywhere in sight. As a result, you will gain 10 freespins with the opportunity to gain more by retriggering the feature. You will again need to land at least 3 scatter icons in order to receive an additional 10 freespins for a grand total of 20 possible freespins.

There’s one more special feature in this slot game. You can trigger it by landing 2 Bonus symbols on reels 1 and 5. A sailing ship represents the Bonus symbol. And once you have activated the feature, it will show you a new screen with a set of six ships. Your goal will be to aim the canon at them and hit one of the ships. If you miss – the game will end, but if you hit your target, you will receive a multiplier on your total bet.

Pirates Treasures Deluxe is a very decent slot with a fun bonus feature. And the presence of freespins further adds to the overall appeal of this slot.