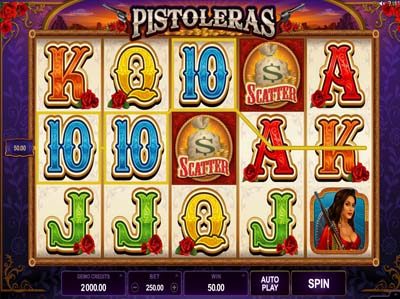 Pistoleras takes you to the Wild West, where you’ll find reels filled with beautiful women who are all very capable of handling a gun. Not only that, but you’ll find that the game is set against an almost Arizona-esque background, taking you right into the middle of the desert state. Initially, there isn’t any kind of soundtrack involved in the game, although you’ll find that whenever you form a winning combination on the reels, you’ll hear the sound of guns firing and a Western jingle. There are three ladies with guns on the reels as icons, while the remaining standard offerings are presented in the form of the A, J, K, Q and 10 symbols.

The game itself is presented on a fairly standard five reel and three row interface, and Microgaming has also integrated a total of 25 separate pay lines as well. These have been fixed in position, so you’re not able to alter them around. However, you can change your wager, and this is done first of all by switching the value of a single coin. This provides you with a range of between £0.01 and £1 per line, while you can add between one and 10 per bet line. This allows you to place a maximum overall wager of £250 per round.

There’s a couple of specialities included in this game, with the first of these coming in the form of a wild icon, which is the Pistoleras logo. As a wild, this will substitute for any other icon on the reels in order to form a winning combination, with the exception of scatters. Wilds will also triple your win when substituting.

There are also two different scatter symbols included in the game, and the first of these is the caravan coach. Should you spin three, four or five of these on to the reels in any location, you’ll be provided with 15, 20 or 25 freespins, respectively. All wins are multiplied by times three during the freespins round, and the three female gunners can also appear in this round as stacked icons across all reels.

The second scatter is represented by the money bag with golden coins. Should this show up on reels three, four and five, you’ll trigger the ‘Saloon Bonus’. This presents you with a new screen, and you need to click on targets in order to reveal symbols. Match any three of the gun-holding women to be a winner, or reveal a wild icon to substitute for all of them. These will award multiple wins.

This game provides gamers with a pleasantly welcoming product, and its special features are really what make it something great. The high quality graphics and animations add to the enjoyment as well.