Planet of the Apes slot 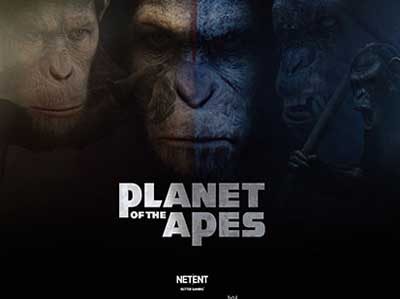 Planet of the Apes slot review

Most will probably be familiar with the cult movie franchise – Planet of the Apes. And what better way to please fans of the films than release a video slot that pays tribute to it? So, that is precisely what casino software manufacturer Netent figured and now we have a Planet of the Apes online slot machine. It helps to also know that they created this offering in association with 20th Century Fox. This particular game actually draws inspiration from two movies: Rise of the Planet of the Apes and Dawn of the Planet of the Apes. With that in mind, this offering actually features scenes from both motion pictures, adding more authenticity to it. On top of that, when the game loads, you will notice the screen is divided in two parts: one representing each movie. Many of the characters from the movies are also present on the reels. 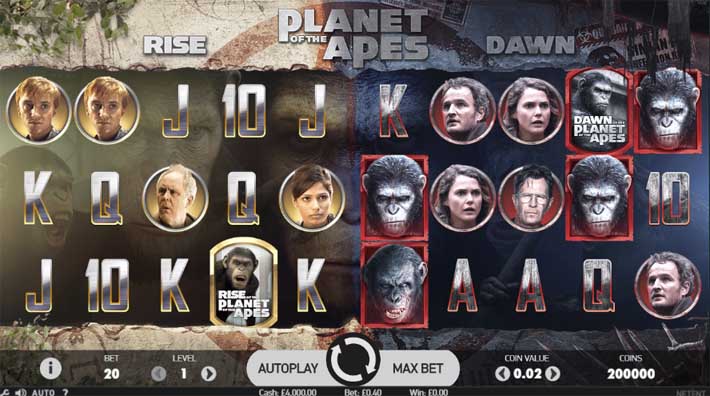 The slot symbols kick off with the less valuable card symbols. They are simplistic, with a metal finish and include the symbols A, K, Q, J and 10. These are also the same for both screens, Rise and Dawn. However, the higher value symbols will differ, depending on the screen. Each has a set of 5 character symbols from each of the movies. And the two highest paying icons are the ape characters Koba and Caesar. And all throughout gameplay you will also get to hear your favorite characters, not just see them. This then brings us to the layout. As there are 2 screens, there are twice as many reels than what the standard would suggest. Thus, there are 10 reels and 3 rows in total. Together they have a total of 40 paylines available. However, you will not be able to regulate these. Stakes are in a very comfortable range, starting at 20p per single spin. And the largest possible stake will set you back a total of £200 per spin. The Return to Player (RTP) in Planet of the Apes is about 96.33%.

Planet of the Apes special features

Just as every set of reels has its own symbols, they also each have their own Wild. One is Gold, the other – Red. Both are just as valuable as the Caesar symbols, meaning they offer the highest payouts on these reels. More importantly, though, they can appear in every position on the reels. And in addition to that, they will be able to substitute for any of the regular symbols. And thus, they can help complete winning combinations. Moreover, if you land a stack of Wild symbols on the first set of reels, they will replicate onto the second set. However, neither of the Wilds can replace the Bonus or Scatter symbols.

In turn, the game’s Scatters come in the form of the game’s logo. Again, they are different for each of the reel sets. Just like the Wilds, these too can appear in any position on any of the 10 reels. And they will each be able to trigger their respective bonus features. The Rise of the Planet of the Apes Scatter will activate the Rise Freespins Bonus feature. And, likewise, the Dawn of the Planet of the Apes Scatter will be able to activate the Dawn Freespins bonus feature. To trigger either of these, you will need to land at least 3 of the respective Scatters on the respective reel set 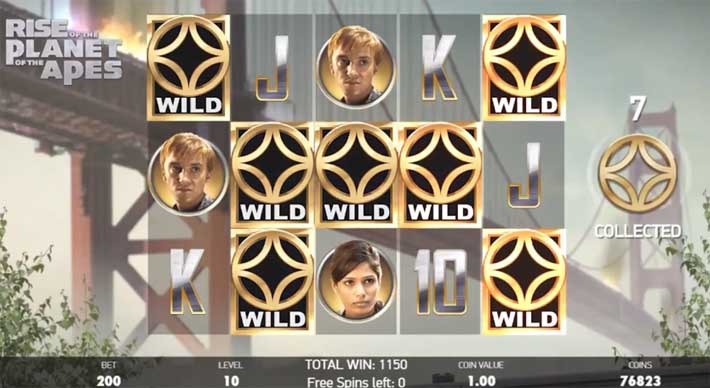 The Rise freespins will give you 10 freespins, during which you will collect all Wild symbols that land on the screen. Then, during the last freespin, the accumulated Wilds will be added to the reels. 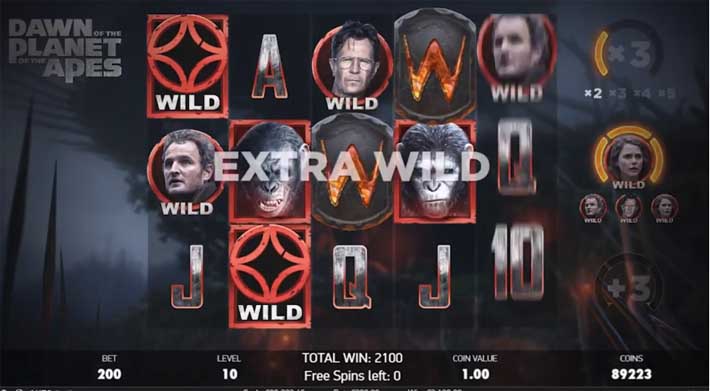 As for the Dawn freespins, there will be 15 of these and you can benefit from multipliers, extra Wilds or extra freespins. And if you land 3 or more Scatters on both sets of reels at the same time, you will get to play both bonuses one after the other.

Planet of the Apes certainly does not disappoint. The visuals are fantastic and offer cool animated sequences, as well as scenes from the movie. So, there’s plenty of entertainment to go around. But on top of that, and most importantly, this title has plenty of winning opportunities to offer. There’s an array of special features that you can take advantage of, although we would probably say the Dawn freespins round is the most rewarding of them all. And you can trigger the bonuses fairly often, which is also great. But the base game can prove pretty lucrative as well.