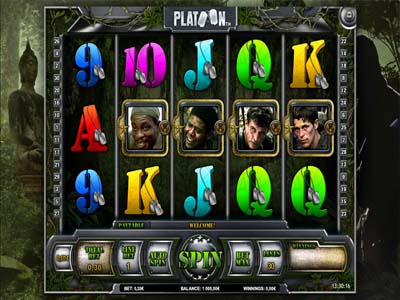 For those people who remember the 1986 war film, Platoon, starring Tom Berenger, Willem Dafoe and Charlie Sheen, iSoftBet has crafted an amazing game based on it. The reels of the game are filled with characters from the film, including Forest Whitaker as Big Harold, Dafoe as Sgt. Elias, Keith David as King, Sheen as Pvt. Chris Taylor, and Berenger as Sgt. Bob Barnes. Alongside these icons are standard slot game symbols of A, J, K, Q, 9 and 10.

The layout of the product features five reels and three rows of an interface, with a total of 30 paylines, all of which can be customised. The coin value included in the game starts from the minimum of £0.01 and reaches a maximum of £0.10 per active payline. The line bet can also be changed from the minimum of one up to a maximum of 10, therefore allowing players to place a maximum overall wager of £30 per spin. Auto Spin and Bet Max buttons are also available for those players interested in using them.

The wild symbol, represented by the army tank, stands in for other symbols on the reels to create a winning combination, except for the bonus icon. Any win featuring a wild symbol will pay out triple the win, and if any wilds are present on the reels after the pay, all of them will move one reel to the left and you wil be awarded a re-spin for free. These continue until all wilds exit the screen.

Platoon is a game that is capable of bringing an 80s film into the new millennium, featuring rich graphics, animations, and a nice selection of added perks. With a return to player of 96,96%, it is also one of the better paying slots out there.