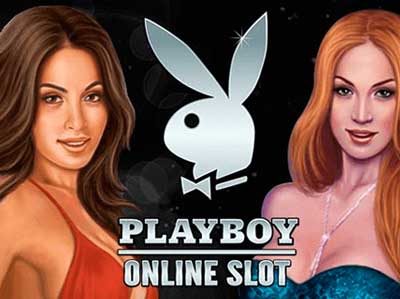 Playboy is a fantastic online slot game by slots developer Microgaming that is quite clearly focused on the popular men’s magazine of the same name. Everyone recognizes the logo depicting a bunny with a bowtie and everyone knows what it’s all about. However, this interpretation of the famous magazine is little less steamy than the real deal. But don’t worry; players will still get their fair share of attractive young women winking at them from the reels. As far as the design of this slot goes, it’s very sleek and stylish – just as you would expect. The color scheme is black and silver, with fine silver patterns lining the backdrop. There are two types of symbols here: those that follow the same color scheme and those that directly have to do with the magazine. In addition, there’s also a fairly pleasant, easy-going soundtrack playing in the background. 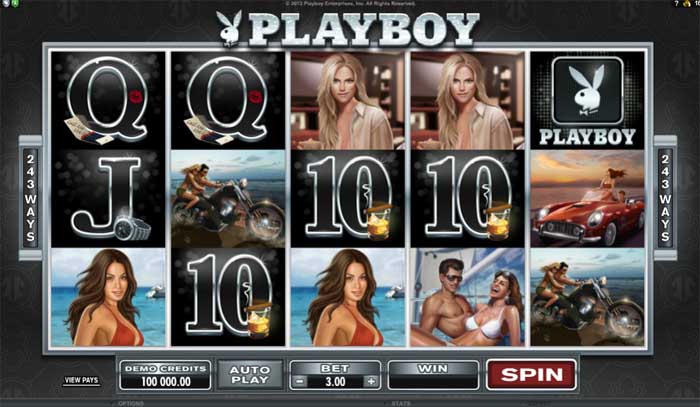 Now, the first type of symbols we mentioned are actually the lower value playing card icons. These are all just as sleek as the overall appearance of Playboy. And each of them comes with a different small attribute, like a glass of whisky and a cigar, or an expensive watch. The symbols in question are A, K, Q, J and 10. Next are the higher value icons, featuring a few lifestyle images. These include a symbol depicting a couple on a motorcycle, or one driving around in a fancy car. And a third shows the same couple enjoying themselves on a yacht. Next are four Playboy models, looking as attractive as can be. They are all dressed, though and the highest value one appears in a club and is holding a drink. The layout will be very familiar, with 5 reels and 3 rows. There are 243 ways to win, and these are of course fixed. In addition, you can enjoy a betting range of between 30p per single spin and £15 per spin. The RTP of Playboy is set at 96.57%.

The Playboy bunny logo is the game’s Wild symbol and is also the second most lucrative symbol in the entire game. It can land in any position, anywhere on the five reels. And on top of that it will also be able to replace any of the other symbols to help contribute to winning combinations. That way it can potentially also increase your winnings. Furthermore, the Wild symbol will also generously double the payouts for any winning combination that it takes part in! Keep in mind, though, that it will only not be able to substitute for the game’s Scatter icon.

The Scatter, in turn, features a Playboy magazine with a semi-naked model on the cover. Similarly to the Wild, it can also appear anywhere on the screen, at any time during gameplay. In addition to that, it is also the ultimate, highest paying symbol on these reels. But it has a more important purpose in this game. The Scatter will be responsible for triggering the freespins bonus feature. It’s a layered feature, with several levels that you can unlock as you keep triggering it. If you are familiar with other Microgaming slots using this engine, you will recognize the concept immediately. 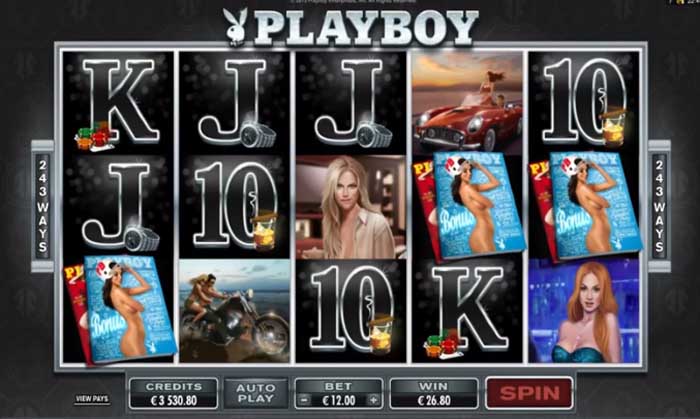 In order to trigger the freespins round, you will need to land 3 or more Scatter symbols during the same spin. As a result you will first have access to the first level of the special feature (each has to do with a different model) is Kimi. It will grant you 10 freespins and a 5x multiplier on all your winnings. You can also retrigger this feature by landing another 3, 4 or 5 Scatters. Next, after you have triggered the bonus for the 5th time, you will gain access to Sofia’s level. This will, in turn, reward you with 15 freespins and a Running Wilds feature. The feature will offer a stack of Wilds that will grow by 1 Wild for each freespin. 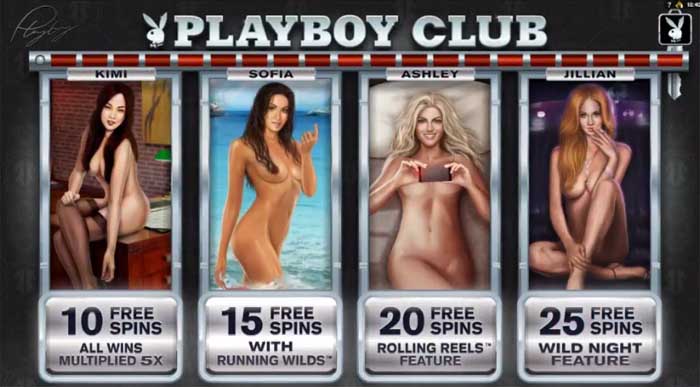 After the 10th trigger, you will unlock the Ashley level, receiving a total of 20 freespins. In addition to those, you will also get a Rolling Reels feature. As a result of it, players can benefit from increasing multipliers of up to 5x. And last but not least, you 15th trigger will award you 25 freespins and fully Wild reels. 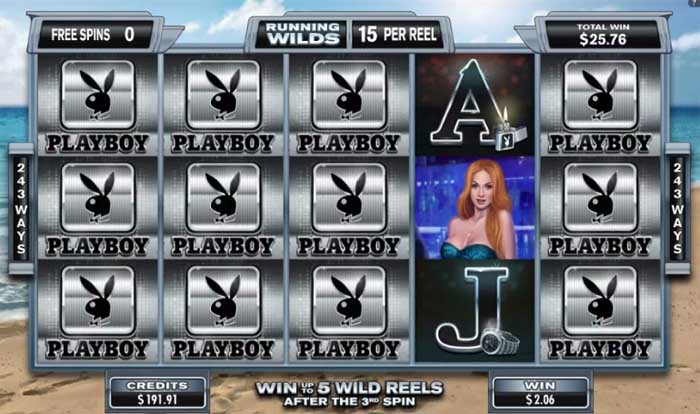 Playboy is a stylish slot game, with a pretty steep variance and attractive features. Besides the main bonus round – the freespins – players can also benefit from random Wild features that can prove quite lucrative. And another very cool thing about this title is that it memorizes your progress. So, you can leave the game and come back after a while and continue unlocking levels from where you left off. And the further you make it in the bonus round, the more rewarding it will be.