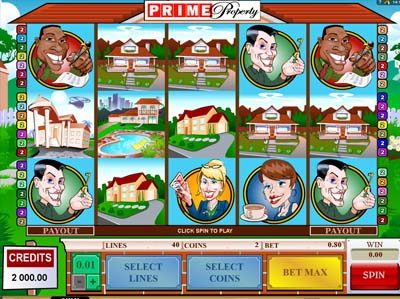 If you’re a fan of the real estate market, then we definitely implore you to play the Prime Property slot game from Microgaming. It’s filled with imagery of houses, estate agents and all the rest of the scenes to go with it. The game takes place against a back drop of green grass, flowers and blue skies – the perfect location for a dream house. The icons included on the reels start with the lower paying symbols of houses, which range in size from the almost-bungalow-like building through to the very big mansion with heliport. There are also four higher paying estate agent character symbols, one of whom is offering tea, another providing a key, the third requiring a signature on the contract, and the fourth offering up her business card.

As a standard video slot, you’ll be playing this game on a layout of five reels and three rows, while the developer has also included 40 different pay lines into it alongside. You can change the amount of lines you play with the ‘Select Lines’ button or by clicking on the numbers down the sides of the reels. You’ll also be able to adjust the wagered amount per spin, and this is done by increasing the coin value between £0.01 and £0.25, while the amount of coins played per line can be changed between one and five. Therefore, the maximum overall bet that you can place stands at £50 per spin.

There’s the inclusion of a wild symbol in this game, and this is represented by the Prime Property logo. As a wild symbol, this will replace all other icons on the reels, except for the scatter and bonus symbols, making a winning combination. Should five of these show up on a payline, you’ll win the maximum payout of 12.000 coins.

The scatter icon included in the game is the moving van, and this symbol will pay out wherever it appears on the reels. You will win an amount based on the total wager placed by a set amount, with five providing a multiplier of times 100.

Finally, the newspaper of properties is the game’s bonus symbol. Should three, four or five of these appear in view in scattered locations, you’ll trigger the bonus round. This is the freespins round, and you can receive up to 40 freespins with up to an eight times multiplier included. More bonus icons showing up in this round will provide further freespins and multipliers.

We actually really enjoy this game. It’s a fun take on the real estate world and provides you with thrilling specialities and standard game play.