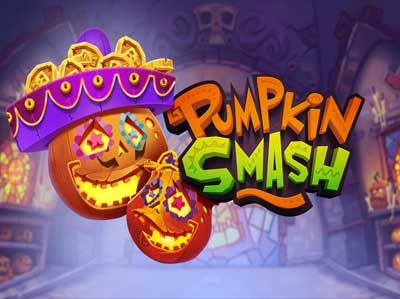 Just the right season for a title like Pumpkin Smash, wouldn’t you agree? This slot is brought to you by software developer Yggdrasil. As far as the theme of this offering goes, it offers a mashup of Halloween and the Mexican Day of the Dead. It’s an interesting concept and now that the latter is becoming more and more popular throughout other regions of the world, it seems only fitting. The graphics and overall design of this title lives up to the high Yggdrasil standards. In the backdrop you see massive stone structures, and all over them are candles and jack-o’-lanterns with scary faces. The soundtrack playing in the background, though, is anything but that. It features a pleasant guitar melody. So if you aren’t all in all a fan of spooky titles, you will be able to fully enjoy Pumpkin Smash. 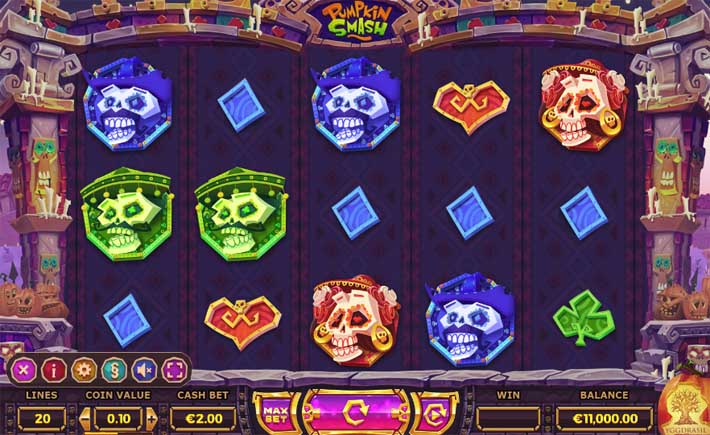 As for the slot icons, things are traditionally pretty straightforward. There are only 4 lower value icons and just as many higher valuable symbols. The former feature the playing card suits, styled appropriately to match the theme and each coming in a different color. And these are blue Diamonds, following which are the green Clubs. Next are the purple Spades and lastly, we have the red Hearts. The higher valuable symbols on these reels come in the exact same colors. The main difference, however, is that the symbols comes in the forms of skulls. One is wearing a cowboy hat, whereas another has a sombrero on. And the highest paying two are female skulls with roses for hair and large gold earrings. This brings us to the game’s design, which is fairly conventional. It features the most common layout of 5 reels and 3 rows. And there are a total of 20 available paylines, which are by the way fixed. This means you won’t be able to regulate them. Stakes are within a very agreeable range, though, spanning from 20p per round and to £100 per round. You can count on an average RTP of about 96.2%.

Pumpkin Smash also offers a Wild symbol, which can land in anywhere on the slot reels. It will also be able to replace any of the regular icons here. And in doing so, the Wild will be able to contribute to any winning combinations, which can in turn boost your payouts. However, note that the Wild symbol doesn’t offer any payouts of its own. It will not have the capacity of substituting for the game’s Bonus symbol either.

In turn, the Bonus symbol comes in the form of a pumpkin and, you guessed it, it’s also wearing a sombrero. The pumpkin symbol can also land in pretty much any position on the reels, but it also doesn’t offer any payouts. Instead, it can activate the Pumpkin Smash bonus feature, which is far more attractive anyway. And in order for this to happen, you will only need to land 2 or more of these Bonus symbols simultaneously during the same spin. 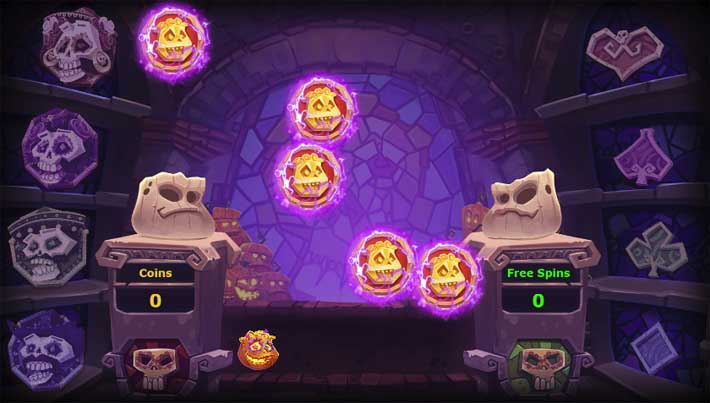 This will result in you entering a new screen, where you will need to smash each of the pumpkins that you landed on the reels previously. So, if you landed 2 Bonus symbols, you will need to smash 2 pumpkins. Smashing each of them will award you anything from 2 to 20 prizes, depending on the size of the pumpkin. The prizes can be cash rewards, of up to 2,000 coins, in fact. Or they can be freespins. In fact, if you landed 3 Bonus symbols to begin with, you will be guaranteed to get freespins. During this round, you will just get to increase their number.

In addition, you can also reveal multipliers by smashing the pumpkins. The value can be anything between 2x and 7x, however the multiplier will apply only to a specific symbol. And it will last throughout the duration of the freespins bonus round. Furthermore, you can also retrigger the feature during the freespins. For this, you will need to land a minimum of just 1 pumpkin symbol during a spin. However, during the retrigger, each pumpkin you smash will only yield up to 10 prizes. And these can give you up to 16 freespins, another multiplier of 2x up to 7x or even a cash bonus of up to 875 times your total bet.

Pumpkin Smash is fairly simple and straightforward. There’s basically just one special feature and triggering it is no rocket science. In addition, you will get to activate it at pretty decently spaced intervals. Winnings will obviously be a bit smaller in the base game. But the bonus feature may prove substantially more rewarding, especially if you make it to the freespins and with the help of a handy multiplier. With that in mind, we would but this title in the medium variance range.