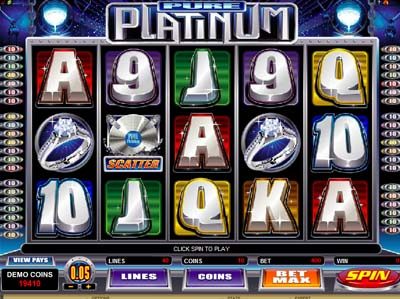 Presenting you with a soundtrack that harkens back to the days of 90s Atari games, this may not sound like such a great product upon first loading it up. However, when you get past that side of it (or, press the much-needed mute button) you’ll be able to appreciate it on a bigger scale. Its reels are filled with the standard A, J, K, Q and 10 icons, all thematically created in the relative metal. Alongside these are a few different expensive-looking items, such as a platinum watch, ring, and ingots of platinum to feast your eyes on.

Playing the game will give you five reels worth of a layout, as well as three rows alongside. Meanwhile, there’s a total of 40 pay lines included, although these are customisable for those players wishing to place wagers on less. And speaking of wagers, you’re also able to alter the coin value to suit your needs from £0.01 up to £0.05 per active line. In addition, the amount of coins you use per spin can be changed between one and 10, allowing players to place a maximum overall bet of £400 per round.

There’s a wild icon included in the game, which is represented by the Pure Platinum logo. This appears stacked inside both the base game and freespins round, and will substitute for all symbols except scatters.

Scatter icons are represented by the platinum record, and three or more of these appearing anywhere on the reels will trigger a freespins round. You as the player get to choose what type of freespins round you receive, with the following being on offer:

There’s also a gamble feature to allow you the chance to double any wins you make in the base game.

Pure Platinum is one of Microgaming’s products that has been very nicely designed overall, but suffers from a lack of additional content. So, it’s nice that there are freespins and wild icons, but bonus rounds mean everything to a lot of players, and this game doesn’t have any.