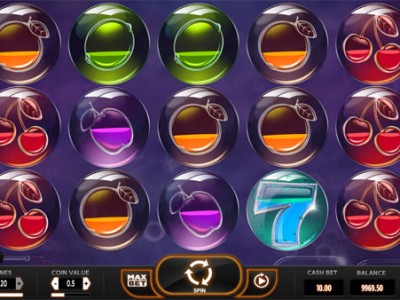 Are you ready to play a game that merges science with the traditional symbols of a classic slot machine? Well, that’s exactly what you’ll get with Pyrons. The symbols are of plums, oranges, limes, cherries, 7s and stars, all of which are encased in their own bubbles. An almost arcade-sounding piece of music has been included in the game as well.

There’s a total of 20 paylines included in this game, which are spread across the five reel, three row layout. The paylines aren’t customisable, but the coin value can be changed between the minimum of £0.01 and the maximum of £2.00 per line. This allows a maximum overall wager of £40 to be placed per spin.

Every time you spin a winning combination in this game, the symbols included in it will explode, leaving room for new symbols to fill in the spaces. The multiplier that can be seen along the left side of the screen will also increase for each consecutive win, being able to reach a maximum of times 20.

For a slot game of such a modern creation, it may appear odd that there is no wild symbol incorporated. And yes, this is quite true, but with the exploding symbols on the reels, it doesn’t really require one to make it entertaining and compelling.

Pyrons is a simple game in terms of the features of it. The multiplier that is included adds a nice touch to the main game, and the graphics incorporated make it a very visually appealing product. As mentioned, the exploding symbols included in a winning combination is a welcome addition, especially considering that you can spin multiple wins from a single spin.