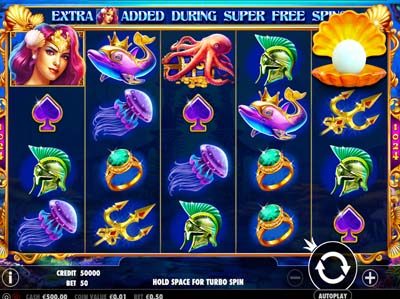 Queen of Atlantis is a mystical online slot game by slots and casino games developer Pragmatic Play. It centers on the mythical land of lore and legend – Atlantis. Set deep under water, the backdrop reveal the magical realm of the sunken city. Massive structures, held up by marble pillars are visible behind the transparent reels. Some have magnificent sculptures decorating them, such as the dolphin statues to the left of the reels. And all around the reels themselves are corals and sea creatures in all the colors of the rainbow. They even continue onto the reels, as well. You will see different aquatic animals and fish, such as jellyfish and octopi. There’s even a royal dolphin, wearing a golden crown. In addition, there’s the golden trident and a ring with a large green gem. There’s also a green helmet there, too. Finally, that brings us to the low value icons, each representing a certain playing card suit. We’d like to also point out that the enchanting soundtrack in this slot game will truly help immerse you in this underwater world of wonder.

As far as the layout in Queen of Atlantis goes, it features a grid of 5 reels and 4 rows. There are 1024 opportunities to win in this slot game. Needless to say, you won’t be able to play around with the paylines and adjust them to your liking. Bets here are relatively moderate in price and start off at 25p per single spin. The highest amount you will be able to wager on these reels, though, is £250 per spin. That makes this slot game ideal for pretty much any pocket. Note that you will easily be able to adjust the coin value and number of coins with the help of the controls on either side of the Spin button. The RTP in this game is also fairly decent at 96.41% mark.

The fishtail you see disappearing under the surface of the water and against the shining full moon is the Wild symbol in Queen of Atlantis. It can stand in for any of the other existing symbols on the reels and that way help you increase your chances of landing winning combinations. However, the Wild can only appear on the middle three reels 2, 3 and 4. What’s more, it won’t be able to substitute for only a single symbol here – the Scatter symbol. 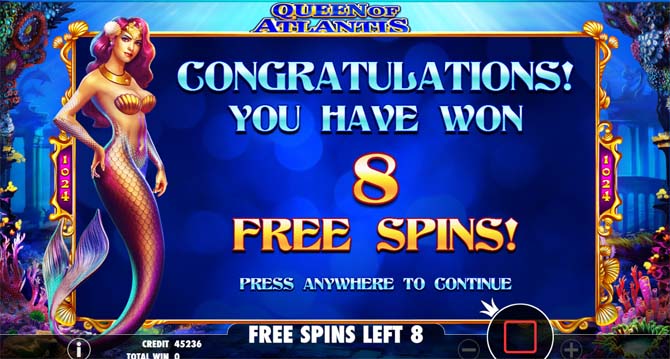 The Scatter, in turn, comes in the shape of a large white pearl in the mouth of a golden clam. Unlike the Wild symbol, the Scatter can appear in any position on the reels. But to really benefit from it, you will need to land at least 3 of it simultaneously during a spin. This will automatically trigger the freespins bonus round. The number of Scatter will directly impact the number of freespins you will get. Thus, 3 Scatter symbols will give you a total of 8 freespins, whereas 4 Scatter will award you a total of 15 freespins. And last but not least, 5 Scatters will give you the maximum of 20 freespins. What’s more, you will be able to retrigger the feature and earn an extra 5 freespins for landing 3 or more Scatters. 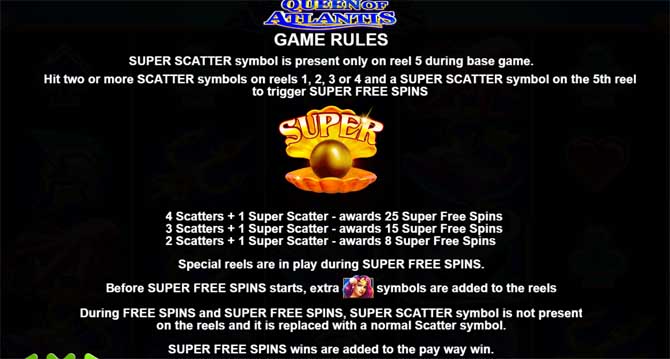 Alternatively, you can go directly for the Super Freespins feature. If you land the regular Scatter symbols at least twice on the first 4 reels and the Super Scatter on reel 5 simultaneously, this will trigger the feature. You can receive 8, 15 or 25 freespins, depending on the total number of Scatters you landed. But the real benefit of the Super Frespins feature is that it will have extra Mermaid symbols on the reels. The Mermaid symbol is the most lucrative one here. But what’s more, she can also appear stacked, which can make for even greater winning opportunities! You can also retrigger the Super Freespins feature, only unlike during the regular freespins, you can receive more than just 5. Again, the number of Scatters you land will determine the exact number of freespins you can count on. Landing 3, 4 or 5 Scatter symbols will give you 10, 18 or up to 25 extra freespins. And moreover, there’s no limit to the number of times you can retrigger both the regular freespins and the Super Freespins features.

Queen of Atlantis doesn’t introduce us to an entirely new and unique theme. There’s a fair share of other slots out there that have also had a go at it. However, the graphics are really nice, as is the magical melodic soundtrack. In addition, the game also offers a decent amount of special features to benefit from. Especially the fact that you can keep on retriggering the freespins features makes for an even more attractive asset. In addition, as this slot falls in the medium variance range, you can expect wins to be at decent, somewhat regular intervals.