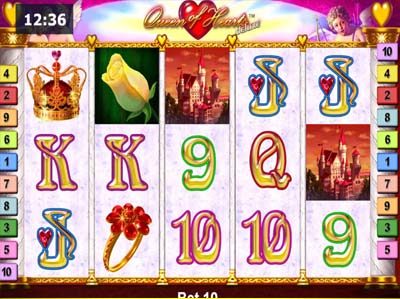 Queen of Hearts is a 2007 slot game by Austrian slots developer Novomatic. You will notice immediately that the graphics are quite dated, but don’t let that spoil your fun. The slot centers on a romantic theme, featuring fairytale like castles, angels, hearts, jewels, flowers and all things idyllic and amorous. The reels also depict all the basic playing card symbols from Ace to 9. And all of this takes place against a heavenly backdrop, with a couple of Cupids looking down onto the reels.

The layout is a regular 5 reels and 3 rows, with 10 paylines in total, but those you can adjust in the settings. Furthermore, you can also adjust the amount of coins you would like to bet per spin. The minimum amount is 10p and the maximum is £1000, whereas the RTP is about 95%.

Watch out for the Wild symbol on these reels: it showcases a big beating red heart. And it’s also the highest paying symbol, allowing a total win of up to 10,000 times your line bet! Furthermore, it can help create winning sequences by replacing missing symbols of a kind. All symbols are subject to substitution by the Wild, save for the Scatter symbol.

The Scatter symbol depicts a beautiful maiden with golden hair and a charming smile. She can land anywhere on the reels and you will be looking to get three or more of her at the same time. This will activate the game’s freespins feature, awarding you up to 20 freespins! The exact number will depend on the number of Scatters that actually triggered the feature. For 3 Scatters, you will get 8 freespins, 4 will grant you 15 and 5 Scatters will land you the maximum of 20 possible spins. You can also retrigger the feature, gaining up to 40 freespins. And you can also benefit from the random Wilds that will be shot onto the reels by Cupid. 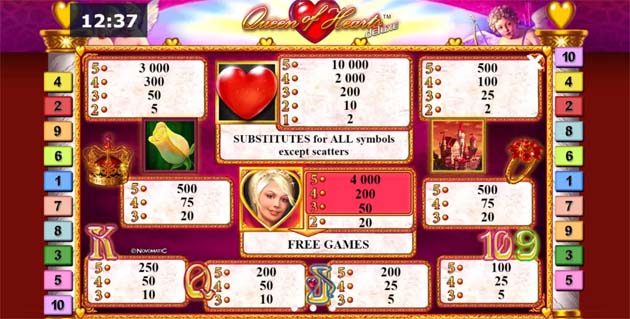 In addition, let’s not forget the Gamble feature. It’s fairly common for Novomatic games, but is always a pleasure to have anyway. It gives the base game a nice spice to it and allows you to multiply your wins. Simply click the Gamble button and you will be able to play the side game of guessing the color of a playing card – either black or red. A correct guess will double your amount and will move you to the next attempt. And a wrong guess will take away your winnings and end the game. There can be several attempts at this game, so you have the chance of accumulating a handsome prize.

Queen of Hearts is a very decent, high variance game. And as such, it can make for pretty terrific payouts if you can make full use of the freespins and additional Wilds. But landing enough Wilds in the base game can also reward you with some very impressive winnings.