Quest for the Minotaur 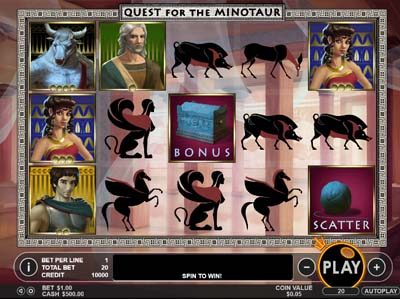 Quest for the Minotaur Slot Review

The Minotaur is arguably one of the most menacing mythical characters in Greek mythology. Software provider Pragmatic Play has decided to show us its take on the legendary beast in the slot game Quest for the Minotaur. Contrary to what one might expect, the game seems to be situated not in a dark labyrinth, but in an open building. There are plenty of voices in the background and the reels showcase a mix of animal depictions and 3D characters. The developers have escaped using playing card symbols and have replaced them with a number of different creatures, such as Pegasus, a boar and a ram. The higher value symbols include human character and following them is Minotaur himself.

The layout of this game has the standard 5 reels and 3 rows. There are 20 paylines in total, but those are not subject to alteration. However, you may choose the amount of coins you would like to bet per line, as well as determine the value of those coins. This makes for a betting range of 20p per spin up to £100 per spin. As for the RTP, it ranks rather low at 94.76%.

Quest for the Minotaur features a total of 3 special symbols. First is the Wild, which is a more ominous portrayal of the mythical beast. Aside from being able to replace any of the standard symbols to create winning combos, it is also the game’s highest paying symbols. Landing 5 of a kind on a payline will grant you 5,000 coins. There are also two more special symbols, both of which the Minotaur cannot substitute for.

One of them is the Scatter symbol, coming in the shape of the famous ball of yarn. It can appear anywhere on the reels and you will be looking to land at least 3 at the same time. This will activate the freespins feature, where you will receive 12 freespins. However, the exact number of Scatters you landed will determine the multiplier that will go with them. Thus, the minimum of 3 Scatter symbols will grant you a 3x multiplier. 4 and 5 Scatter symbols will reward you with multipliers of 5x and 10x, respectively.

The game also features a Bonus symbol that comes in the form of a chest. Again, your goal will be to land 3 Bonus symbols during a spin to enter the bonus round. You will then need to escape the labyrinth, by first choosing a shield to protect yourself with and then an exit, through which to escape the labyrinth. Each of those picks will reward you a different amount of points, whereas the maximum prize is 2,300x your stake!

Quest for the Minotaur is a fairly entertaining game, with dynamic gameplay and lucrative winning possibilities. The design of the game and the bonus rounds are also pretty exciting. However, hitting those bonus features may prove to be somewhat of a challenge.