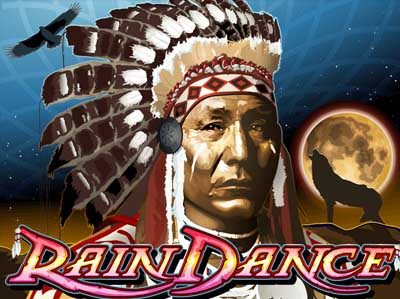 Rain Dance is a fun and potentially very rewarding Native American themed offering brought to you by software provider RTG. It doesn’t have the most sophisticated graphics and the features aren’t over the top, but it’s a very decent online slot game nevertheless. Despite there not being the glossy finish of the visuals, they are actually quite charming. And no, they don’t offer any animated sequences or do a little dance when part of winning combos. There’s also no atmospheric soundtrack to add to the ambience in this title. You will be spinning the reels to the sound of the generic mechanical effects. And winning combinations will activate an equally mundane and generic sequence of sounds. And even the backdrop doesn’t leave you much room for comment, with there just being some resemblance of a starry night sky above the reels. 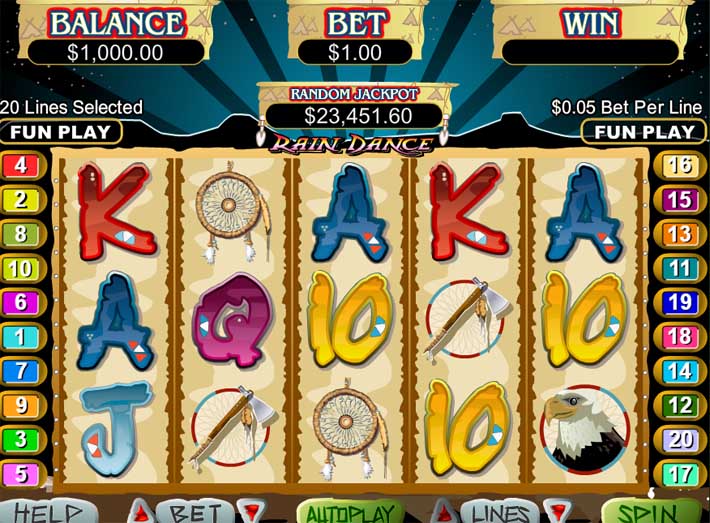 It’s the symbols and features here that are really the attraction. The former include the lower valuable playing card icons. And these are nicely styled to fit in with the theme, though they still come in their customary bright colors. The symbols in question are A, K, Q, J, 10 and 9. This brings us over to the higher value icons that bear more relevance to the theme. These, in turn, start off with a traditional tomahawk. Next is an elaborate dream catcher symbol, following which we have the bald eagle. And last but not least, the highest valuable icons on these reels is the teepee. With its support you can win up to some 2,500 coins. The layout in Rain Dance is pretty standard and no different from most other online slot games out there. It has the habitual grid of 5 reels and 3 rows, with a total number of 20 paylines. You are free to regulate the paylines as you see fit, though. This affects the betting range accordingly. So, the minimum stake on these reels is only 25c per single spin. And the maximum bet will set you back a total of $100 per spin.

Look out for the Chief symbol on these reels, as he acts as the game’s Wild. Therefore, he will have the capability to substitute for any of the other icons on these reels. What’s more, the Wild can even replace the game’s Scatter symbol in this title. And on top of that, it will also double the payouts for any winning combination that it participates in. So this can be especially rewarding if you can get it to work together with some of the higher value symbols. However, the Chief Wild doesn’t appear just anywhere on the screen. He can only land on the two outermost reels, hence reels 1 and 5. Note that he doesn’t offer any payouts of his own.

In turn, you will also want to keep an eye out for the Scatter icon. It pictures a coyote howling at the full moon. As far its payouts go, these aren’t too impressive. But the Scatter will be able to trigger the main attraction of this online slot game – the freespins bonus round. Unlike the Wild, the Scatter symbol can actually appear on any of the five reels, at any point during gameplay. But you will need to land at least 3 Scatter symbols in order to activate the special feature. 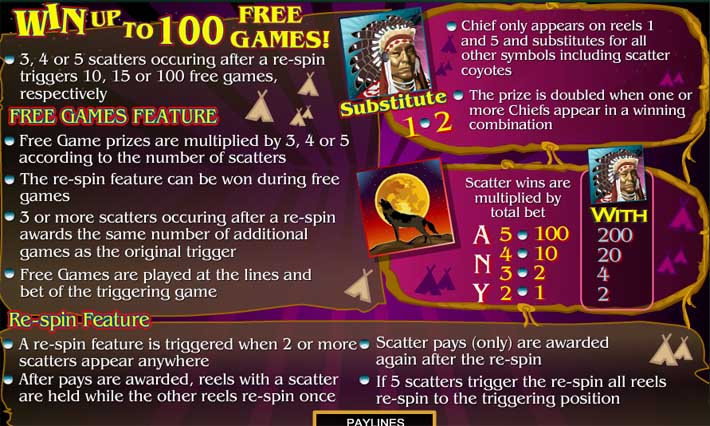 Furthermore, you can actually also achieve this thanks to the respin feature. If you land 2 or more Scatters on the reels, this will automatically trigger a respin. For its duration, the Scatter symbols will remain in place, while the rest of the reels take a spin. Even if you landed 5 Scatter symbols initially all at once, this will still trigger a respin. Only the reels will just spin back to that same position.

Now, once you have gotten your three or more Scatter symbols in place, you will trigger the feature. And you will receive a number of freespins, according to the number of Scatters you landed. 3 Scatters will give you the minimum of 10 freespins, whereas 4 will award you a total of 15 freespins. And last but not least, 5 Scatter icons can give you a whopping 100 freespins. The number of Scatters will also answer to the multiplier you will enjoy during the feature, namely 3x, 4x or 5x. And on top of all that, you can retrigger the feature and benefit from even more freespins!

Rain Dance is a very decent online slot game by RTG. The visuals aren’t stunning, but they’re certainly not in dire need of more work on them. Of course, the main attraction of this title is its freespins round. The prospect of landing a hefty 100 freespins will appeal to anyone, as well the possibility of potentially boosting that number to 200. And add a multiplier on top of that? Sounds almost too good to be true. But triggering the feature will require some patience on your part too, due to this game’s medium to high variance.