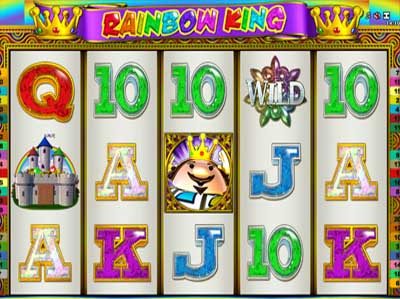 Novomatic’s 2014 Rainbow King slot game is everything the name suggests it might be: fun, colorful and bright. But there are also plenty of ‘kingly’ features to go around, too. The design is flamboyant and might take you aback at first. The letters of the title are each in a different color of the rainbow, as are the basic playing card symbols. In addition to those, the reels showcase fairytale fortresses, bags of gold, a gold crown with heaps of jewels and even Humpty Dumpty.

Rainbow King features a pretty common layout of 5 reels and 3 rows. There are a total of 20 paylines and you are free to adjust those in the game’s settings. In addition, the bet amounts per spin can be as small as 20p and soar up to reach £100. The RTP is estimated to be around the traditional for Novomatic at 95%.

Aside from the Wild symbol, which offers the highest payouts and can replace any of the lesser regular symbols, this game is loaded with bonus features. In fact, there are a grand total of three of them.

First up is the Rainbow King Bonus feature. Lookout for the King (Humpty Dumpty) symbols, as you will need to collect at least three of them on the reels at the same time. This will enter the bonus mode and will present you with a new screen. By pressing the Spin button, you will throw a dice on the game board. You will win different prizes, depending on the box your dice lands on. Watch out for the Take the Money box, as this will end the bonus feature for you. This bonus will also give you the opportunity of winning freespins.

The second bonus feature in Rainbow King is the Cash Castle Feature. To trigger it, you will need to land a minimum of 3 Castle symbols on the reels. You will need to pick one of the three Castles you see, which will award you with a multiplier of anywhere from 2x up to 500x!

And last but not least is the King Cash feature. For this one, you will need to land three of the final kind of special symbol – the Crown. Keep in mind that it only appears on the middle reels 2, 3 and 4.This feature, too, has the capacity of rewarding you with a fantastic multiplier of at least 50x and up to 500x. Only now you will have to choose from 12 Crown symbols, to pick out your prize.

Rainbow King is a very lucrative game, offering stunningly unique opportunities for winning very big. The abundance of bonus features isn’t something you come across often. But their quality is also something else. Let’s just say that you will be incredibly lucky to land a 500x multiplier in some other slot game. And though the graphics may not appeal so much to some, those special features certainly make it worth giving a spin.