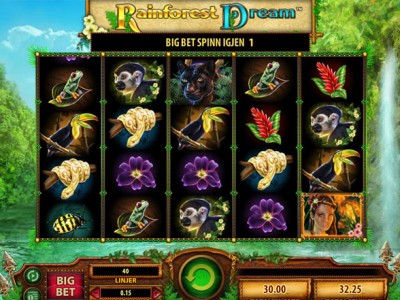 Rainforests are home to some of the most stunning nature and wildlife on Earth, which is why this game from WMS has injected several species into its reels. Rainforest Dream provides symbols of various different flowers, as well as icons of toucans, frogs, snakes, panthers, beetles and monkeys. What’s more, the game is set against a backdrop of a vibrant waterfall and lush, green trees that are situated on a steady riverbank. Spinning the reels will provide you with a piece of calming music that offsets the various animal noises included.

There’s five reels and four rows included in this game, with 40 different paylines included alongside. The lines are fixed, and the coin value can be changed between £0.01 and £100 per line. This gives players the chance to place a huge maximum overall wager of £4000 per spin. There’s also a Big Bet option, which allows you to play five big bet spins for between £10 and £30. The RTP amount is increased during Big Bet Spins, and wilds may be sticky during this feature as well.

The wild symbol that has been included in Rainforest Dream is represented by the rainforest princess. This is wild for all symbols except the bonus icon. There’s also a stacked princess symbol, which appears only on reel one and acts as a wild as well. If it lands fully on reel one, it will transfer to up to two additional reels.

The bonus icon is represented by the scenic image of the rainforest, and this symbol will only appear on reels one, three and five. Three of these scattered on reels one, three and five will trigger the freespins round. A total of 10 freespins will be awarded, and if there’s no win on one of the spins, the reels will re-spin until a winning combination is formed. This guarantees a win on every freespin.

Rainforest Dream is crammed with great perks and features, making it a wonderful game to play.