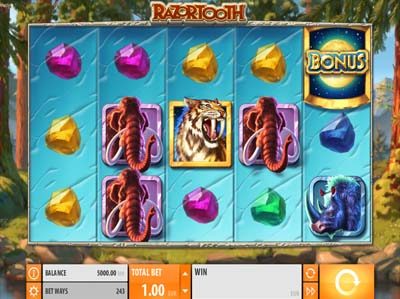 Razortooth takes you deep into the heart of the jungle, and also back to prehistoric times as you’re hot on the trail of a Sabre-toothed tiger! And not only that, but you’ll meet some other ancient animals upon the reels as well. However, before you’re able to get to these, there are various gemstones which will come into play, each of which is a different colour – one purple, one green, one blue and one yellow. These are joined by various symbols of the aforementioned animals, which include a wild bear, a dodo, a two-horned rhinoceros, a woolly mammoth and, of course, the Sabre-toothed cat itself.

The game is played on a five reels and three rows, meaning that you’ll have a fairly familiar interface for playing on, and the developer, Quickspin, has also incorporated 243 different ways to win into it. This is not something that is able to be altered in any way, but players have the opportunity to change the bet value they place. This is done by using the up and down arrows beside the ‘Total Bet’ box, or by clicking on the box itself. Here, you can select a bet between the values of £0.25 and £100 per spin.

Razortooth not only provides a visually stunning and intriguing overall game, but it has had one or two interesting special features incorporated into it as well. These begin with the wilds, which are represented by the game’s logo. Up to three of these will be added to the reels during ‘The Hunt’ random wild feature, and they’ll substitute for all other icons, except the bonus scatter, to form a win.

This game does have an intriguing theme behind it, for sure. And not only that, but the graphics and imagery included within are visually appealing, and the special additions make it all the more enjoyable.