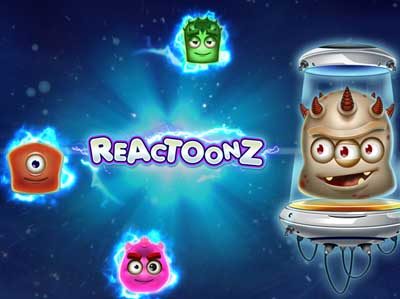 Reactoonz is an online slot game by software developer Play’N Go, and we can promise you it’s unlike most of the slot games you have seen. It has a very unusual theme, but the setup and gameplay here get quirkier yet. All the symbols here are different alien life forms, some more complex than others. They come in different colors and shapes, but we will reach them in just a little bit. The game seems to be taking place aboard a spaceship, with all sorts of high tech electronics and gadgets all around. To the right of the reels you will see an exceptionally large monster-like creature. Its name is Gargantoon and it will have a role to play as you spin the reels here. Otherwise, if you leave it alone without any action for too long, it will fall asleep and start snoring – very unpleasantly. As for the quality of the visuals, it’s really great and there are neat sound effects accompanying gameplay all the way. 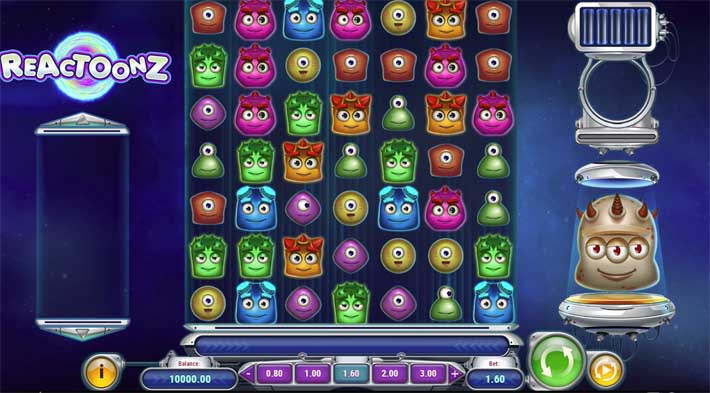 Now as for the symbols, they start off with the lower value primitive lifeforms. You can tell these apart from the others symbol by the fact that they only have one eye each. There are four of these in total, beginning with the yellow round one. Next is the green pawn shaped creature, following which the red square. And finally, concluding this list of low paying icons is the purple diamond shaped alien. The higher paying icons are also four, but they have more features and enjoy a set of two eyes each. First comes the blue one, following which is the orange creature. Then there’s a green one and the highest value symbol on these reels is the kooky purple creature. As for the layout here, you will notice the grid is quite tall, featuring 7 reels by 7 rows. It doesn’t have payline per se, because winning combinations are formed by 5 or more matching symbols that touch vertically and/or horizontally. Bets here can span from 20p per spin up to a maximum of £100 per single spin. And in addition, there’s a decent RTP of 96.51%.

Besides boasting a rather uncommon structure, Reactoonz also happens to offer a whopping 7 different bonus features. And four of them you can trigger simply by landing winning combinations on the reels. Every time you land one, you will charge the Quantum Leap meters one by one. And as soon as you have charged one of them, a random quantum feature will appear in queue. In total, there are four different quantum features.

One is the Implosion Feature, which will transform 3 to 6 symbols on the reels into Wilds. In the meantime, it will also destroy any adjacent symbols. Another is the Demolition Feature, which will destroy all the lower value icons present on the screen. Next up we have the Incision Feature. A Wild symbol appears in the middle of the screen, creating two diagonal lines through the grid. As a result, both of these lines will display the same random symbol. And last but not least, there is the Alteration feature. It will randomly choose one of the lower value symbols, and turn all instances of that symbol on the screen into another symbol. 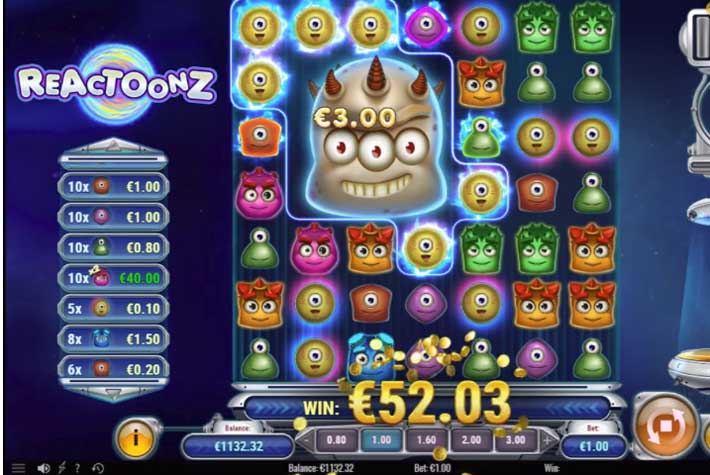 This brings us to the Gargantoon feature, which can take place once you have filled all five of the Quantum Leap meters. The Gargantoon will add a colossal 3 by 3 Wild symbol somewhere on the grid. As you form winning combinations, each following cascade will divide the Wild will split up to become two smaller Wilds (2×2). And finally, after the second cascade, those 2 by 2 Wilds will split to become 9 single Wild symbols. And if as a result of this split you don’t land a win, you will randomly trigger one of the Quantum Features.

Another feature is the Instability feature, where the Garagntoon will add anything from 4 to 8 Wilds to the grid. This feature is triggered randomly and can only take place after a losing spin. Then there’s also the Fluctuation feature we should mention. For each spin, one random lower value symbol will become the fluctuating symbol. And if it becomes part of a winning combination, it will then leave behind two Wild symbols.

Reactoonz is a fun title and it comes with high quality visuals – exactly as you might expect from a developer like Play N Go. It’s refreshing to have something different in terms of the game’s setup, as opposed to the more conventional structure. However, do keep in mind that this is a highly volatile offering, so treat it with caution. Wins may prove annoying difficult to obtain at first. But once you start landing those cascades, it will all be worthwhile. In fact, players can count on wins of up to 4,570 times their total bet per spin.