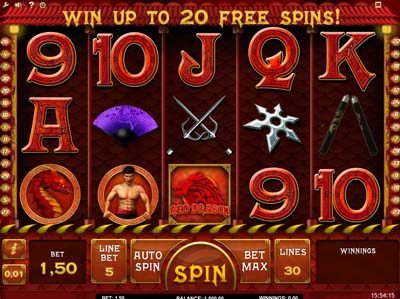 Red Dragon Wild brings to life almost any Jackie Chan film in, in slot game format. And while you don’t actually get to see the Hollywood martial artist appear in the game, there’s a perfectly good stand in who has many of the same traits. The reels themselves are also filled with icons relating to the general base theme, although these start off initially with the regularly seen A, J, K, Q, 9 and 10 icons. Joining them are four other standard symbols in the form of a fan, a pair of twin sai, a shuriken and a pair of nunchaku. One or two other icons provide the game with its special features.

As far as the layout of the game is concerned, you’ll be presented with a five reel and three row interface, and developer, iSoftBet, has also included a total of 30 different pay lines into it. You have the option of reducing the amount of active lines, if this is something you prefer to do, and you can also change around the value of the wager that you place. This starts with altering the coin value between its minimum of £0.01 and its maximum of £1. Further to this, you can switch around the line bet between one and five, and this will allow you the chance to place a maximum overall wager of £150 per spin.

This game features a couple of different specialities, which will assist you with becoming the best martial artist in the world! The first of these is the Extended Wild. This icon is represented by our Jackie Chan lookalike, and as a wild, it will substitute for any other symbol on the reels, except for the bonus and dragon wilds. If it does form a win, it will extend to the full height of the reel, giving you the possibility to form even more wins.

The game’s own logo acts as its bonus scatter icon, and it will pay out wherever it shows up on the reels. Five of them, for example, will multiply your wager by 15 times. Any three or more coming into view will activate the bonus round, and you need to take on the role of the kung fu expert, smashing crates to win freespins. The blue dragon will end the bonus round.

The freespins round begins right after the bonus round, and it incorporates an extra wild into it – the dragon wild. If this makes an appearance, not only will it stand in for other symbols, but it will also turn random other icons into a blue dragon wild, and this locks in place for the duration of the freespins mode.

We’re definitely of the opinion that this is one of iSoftBet’s best offerings in video slots. It feature high quality graphics, appealing and entertaining special bonus rounds, and everything wraps together under a nicely themed base game.