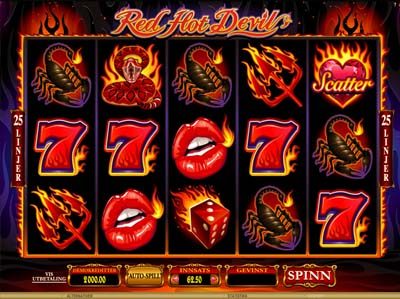 Red Hot Devil from Microgaming manages to merge the fiery heat of hell with wonderful graphic designs and a great amount of sex appeal. It doesn’t really incorporate any specific kind of theme, but all of its icons are on fire. Speaking of the game’s icons, these start with five lower paying options. They are the cherries, the currently rolling die, the scorpion, the snake and the trident. Three more symbols are available on the reels, which are a bunch of roses, a set of playing cards from 10 – A and the number 7. Finally, the two highest symbols are those of the set of lips and the second of the sexy lady.

The overall design of the game is five reels and three rows large. Therefore, you have a familiar enough layout to spin the reels of. It’s also got 25 different pay lines within it as well. Gamers cannot customise this feature in any way. However, there is the possibility of adjusting the bet that you place per round. You’re able to choose from a wager of between £0,25 and £62,50 per spin.

It’s the game’s own logo that provides it with its wild icon and this is its first special feature. As a wild icon, it stands in for any other on the reels in order to form a winning combination. The only exception is the scatter symbol. The wilds will only appear on reels two, three and four.

The scatter icon is the red, diamond heart and it’s this that pays out in whichever position is appears in. If five of them come into view across the reels, you’ll receive a maximum pay out of 25,000 coins. Should three, four or five of them show up in any position, you’ll trigger the bonus choice round. This allows you to pick one of three bonus rounds. These are:

Despite the fact that it doesn’t have such an overwhelming theme behind it, this game is exceptionally entertaining. It includes intriguing graphics and gameplay as well as special features alongside.