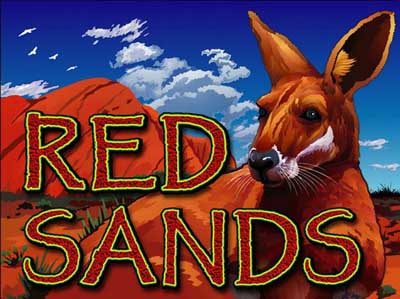 Red Sands is an online slot game by software developer RTG. If you have been wanting to travel to the distant continent of Australia, then this RTG offering will provide you with that unique opportunity. With the iconic red desert plains as its main focal point, players will also get to enjoy some of the Australian wildlife on and around the reels. Of course, we don’t mean of the deadly kind – only the cute and cuddly. As far as the graphics go, though, they are pretty dated. They lack much of the sophistication and glossiness that many modern day online slot games have. The backdrop shows us a mirror image of a kangaroo, with a red rocky mountain behind it and above – the clear bright blue sky. There’s also no soundtrack here, mind you. Besides the generic sound of the spinning reels and the equally boring tune that marks winnings sequences, there won’t be much else to keep you company. 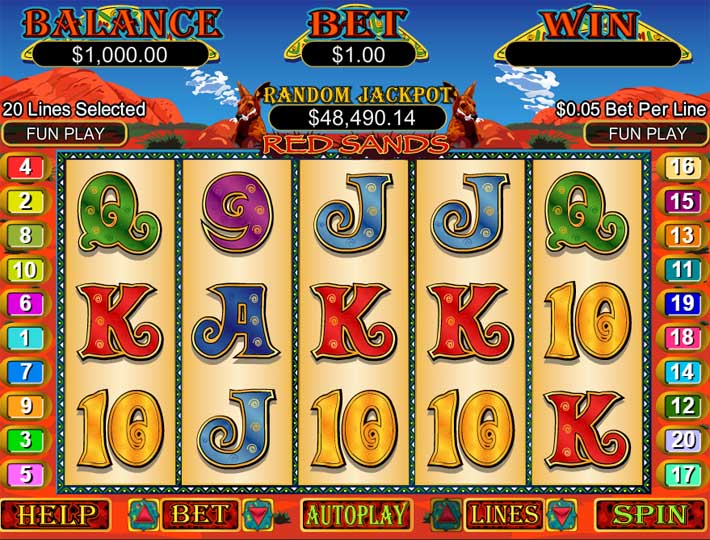 The symbols here start off with the lower value playing card icons. And these have a very quirky design if we might say so ourselves. We can’t say they have any relevance to this particular theme, but they’re pretty fun to look at in a way. The symbols in question are A, K, Q, J, 10 and 9. And after them we have the higher value wildlife symbols, starting with the peculiar looking echidna. Next in line is the adorable big ball of fluff known as a wombat. And last but not least is one of the most recognizable species indigenous to Australia – the koala bear. You can see it munching away on some eucalyptus leaves and offering payouts of up to 1,500 coins. As for the layout, you have your conventional 5 reel by 3 row grid. It has a total of 20 paylines available, but you can just as easily reduce them to any number below that. Thus, stakes here start comfortably low at only 20c per single spin. And they soar up to a maximum bet of $100 per spin.

The red kangaroo symbol acts as the game’s Wild and also happens to be the highest paying symbol on these reels. With its help you can potentially gain a whopping 5,000 coins. You can expect to see the Wild Kangaroo on any position on the reels, at any point during gameplay. And as its Wild duties would suggest, it will be able to substitute for any of the regular symbols on these reels. Thus, it can help complete winning combinations and create more winning opportunities for you. In addition to that, the Wild will also double the payouts for any of those winning combinations. However, the Wild will not be able to replace the Scatter symbol.

In turn, the Scatter comes in the shape of a moonscape and doesn’t offer anywhere near as much in terms of its payouts. But it can also appear in any position, on any of the five reels – just like the Wild symbol. In addition, what makes the Scatter a Scatter is the fact that it can offer players winnings without having to land on an active payline. However, in addition to this, the Scatter can also trigger the Respin feature. To do this, you will need to land at least 2 Scatter symbols all at the same time, anywhere on the reels. As a result of this, the Scatters will remain in place, triggering a respin of the other reels. Potentially, there can be up to 10 consecutive respins. And during those respins, Wilds will be able to replace the Scatters and double their payouts.

With that in mind, we should point out that Red Sands doesn’t have any other conventional special features. There are no freespins, no pick me games, and no Gamble feature even – no bonuses at all. And with them, there are no Bonus or other kinds of special symbols. That said, the only other real attraction in this online slot game would be its Progressive Jackpot. It is on permanent display on the main screen, just above the reels. So you will constantly have it in front of your eyes. You can also trigger it completely at random, after any given spin. It doesn’t matter whether the spin was a winning or a losing one, either.

Red Sands is a very simplistic title, both visually and in terms of the structure. The respin feature is a slightly unusual one, and doesn’t quite come with the benefit of some freespins rounds that we’ve seen by this developer. But it can still yield some satisfying rewards, although this may not be enough to attract some players. However, if you like the theme and don’t mind the older design, you will probably be able to enjoy this offering. The variance is medium, so wins are decent and come at evenly spaced intervals.