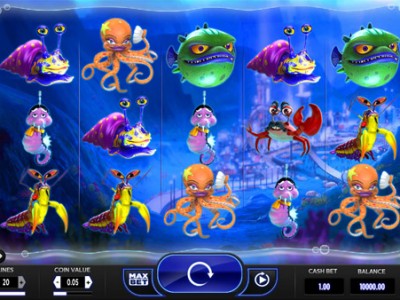 It doesn’t take a genius to work out that Reef Run is based on underwater sea creatures, and the types of animals incorporated into the reels include sea snails, grimacing fish, octopuses, crabs and crayfish, amongst others. There’s a soundtrack incorporated in the game as well that would be very at home in Disney’s ‘The Little Mermaid’.

The game has a very standard five reels and three rows, and provides players with a total of 20 non-customisable paylines. A maximum overall wager of £40.00 can be placed with every spin, while a minimum of £0.20 can be bet. This is made up of minimum coin values of £0.01 up to £2.00 per line.

Reef Run is an entertaining game, for sure. Especially thanks to its beautifully designed graphics and gameplay. Freespins modes are always welcome in slot games, and with this one also including the levelling up feature, it’s sure to provide endless days of fun gaming.