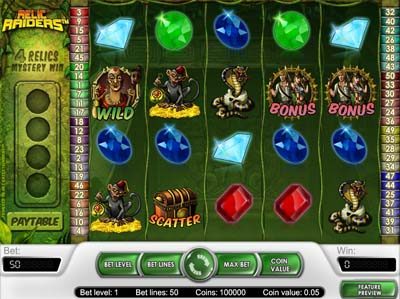 You don’t need to look so far to see where the inspiration for this game from Netent, entitled Relic Raiders, came from. Of course, any game that is inspired by Indiana Jones should definitely include multiple special features, and this one doesn’t let up in this particular area. Incorporated into the product are several different icons, and these start with a few different gemstones in dark blue, green, red and light blue. There’s also four other standard symbols, which are the vicious cobra slithering through a skull, a monkey sat on top of a pile of gold, a treasure map, and an aeroplane.

The game takes on a slightly different layout to the norm, with five reels and four rows being included, and not only that, but its the first Netent game to have 50 different pay lines integrated into it. Of course, you can use the ‘Bet Lines’ button to adjust these, if you have a preference for doing so, and players also have the chance to change the bet amount placed per round as well. This is done by altering the coin value up from its minimum amount of £0.01 to its maximum of £0.50, and also switching the bet level between one and four. Therefore, a maximum overall wager of £100 is able to be placed per spin.

In addition to the standard game play, Relic Raiders offers its players a few special features, starting with its wild icon. This is represented by the raiders’ enemy, and as a wild, he will substitute for all other icons, except for the scatter and bonus icons, to form a win. Five of these on a winning bet line will see you receive a maximum pay out of 10,000 coins.

Joining this, you’ll find that there’s a treasure chest icon, and this is the game’s scatter symbol. This pays out your total bet times by a multiplier. Five scatter icons present you with a multiplier of times 200. However, should you spin three or more scatter symbols, you’ll trigger the freespins round. Simply click a scatter icon to reveal the amount of freespins you’ll receive.

The two raiders represent the game’s bonus symbol, and if you spin three or more of these on to a winning pay line, you’ll trigger the bonus round. Here, you’ll need to visit four different locations on your treasure map in order to raid some tombs and temples. Smashing the urns inside will reveal different prizes.

As far as Netent video slots go, this one is not one of their best. And with 90% RTP is pretty close to being a rip off.