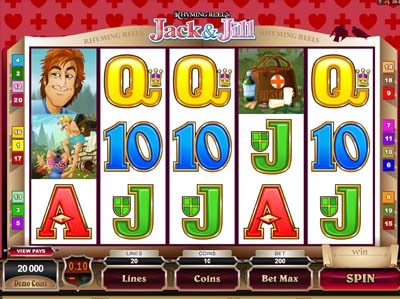 Jack and Jill is obviously one of the most famous children’s nursery rhymes. It tells the tale of two children going up a hill to fetch water. However, on the return down the hill, Jack falls and breaks his head, while Jill comes tumbling after. A somewhat morbid-sounding rhyme for children, of course. However, this game portrays it in a bit more of an adult way. The two characters are present on the reels as more grown-up people. Joining those icons, you’ll find a symbol of the well, a first aid kit and the regularly seen A, J, K icons.

You will also see that the game is shown on a five reel and three row layout. This should provide a fairly familiar interface. Microgaming has also made sure to insert 20 pay lines into the game. You can customise these with the ‘Lines’ button and you also have the possibility to adjust your wager too. This can be done by changing the single coin value between £0.01 and £0.50. Then, you can alter the amount of coins in between one and 10. This allows a maximum overall wager possibility of £200 per spin.

While the overall theme of the game may be based on a four line nursery rhyme, it does feature a couple of specialities. For example, it is the game’s own logo which offers up a wild symbol. This will substitute for any other icon on the reels in order to form a winning combination. The only symbol that it won’t stand in for is the scatter. Each wild coming into play will also add a two times multiplier to the win.

And speaking of the game’s scatter symbol, it is the pail of water that represents this. Scatter awards will multiply your stake by a specific amount, with five scatters providing a maximum pay out of 10,000 coins. You’ll also find that if you spin three, four or five of them into view in any location, the freespins round comes into play. You will receive 15 freespins of the reels with a four times multiplier on all wins.

This one has a nice and easy theme to it. Nursery rhymes will always be in our memories and Microgaming have made sure this one will definitely stick around. Great graphics and gameplay make for a wonderful offering.