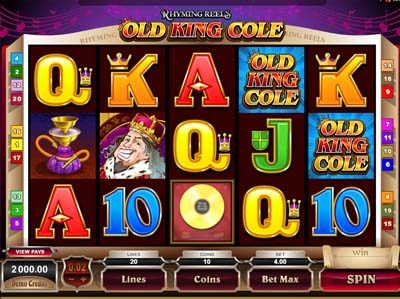 Microgaming’s ‘Rhyming Reels’ series of games manages to offer up a great choice of options. Another one in the series is this Old King Cole offering. This game offers up a whimsical take on the rhyme, featuring impressive graphics and design. The first of its icons are available as A, J, K, Q and 10. As far as the items he calls for go, these are also icons on the reels. You will find his bowl – filled with cereal! His pipe is a colourful hashish. Meanwhile, his fiddler’s three exist in the form of three female guitar players. King Cole himself is also an additional symbol.

As far as the layout goes, this is five reels and three rows large. There are also a total of 20 different pay lines. You can adjust these by using the ‘Lines’ button. You can also customise the amount that you wager per spin. This begins with changing the bet amount between £0.01 and £0.50. Furthermore, you can alter the amount of coins in play per line. This is changeable between one and 10. Therefore, a maximum overall wager of £100 per spin can be in play.

This Rhyming Reels game includes a selection of its own special features. These ensure that your gameplay is thoroughly entertaining. The first speciality is its wild icon and this is the same as the logo of the game. As a wild, it will substitute for any other symbol in order to form a win. The only exception to this rule is the scatter icon.

There’s also the icon of a bejewelled crown. This is the scatter icon, and as such it will pay out wherever it appears. If you manage to spin three, four or five of them into view, you will activate the freespins feature. You will receive 12 freespins altogether and there’s up to a seven times multiplier as well. During the freespins feature, there’s an additional wild icon. This is the gold vinyl record and it works in the same way as the standard wild.

There’s also a gamble feature within the game. This comes into play at the end of every win that you form. This feature allows you to double or quadruple your win.

Old King Cole is a great game on the whole. It takes a classic nursery rhyme and provides players with an entertaining gaming option. Overall, it’s a wonderful addition to Microgaming’s catalogue.