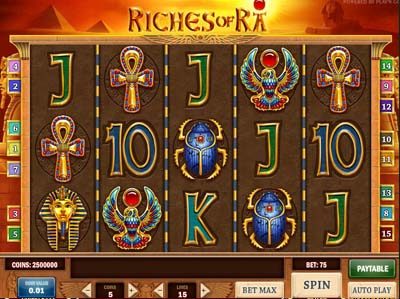 For an authentic Egyptian adventure, you’d be well-advised to check out the Riches of Ra slot game from Play’n Go. This one takes you to the very heart of the culture, presenting you with a background of pyramids and sphinx creatures. The reels are filled with various different icons, including the often used A, J, K, Q and 10 symbols. These are joined by other icons which are related to the Egyptian culture, and they exist in the form of an ankh, a scarab beetle, a jewelled owl icon, Tutankhamen and Horus. There are also some great sound effects included in the game as well.

As far as the interface of the game is concerned, this is provided as a five reel and three row layout, and the developer has added a total of 15 different pay lines into the game alongside. These can be customised to suit your own personal preferences by using the arrow buttons at either side of the ‘Lines’ box. You can also change the bet that you place per spin too, starting with the ability to adjust the coin value between £0.01 and £0.25, while the coins can be changed between one and five. This allows a maximum overall wager of £18.75 to be played.

The symbol of Horus will provide you with the wild icon of this game, offering up its first special feature. As a wild, this one will stand in for any other on the reels in order to form a winning combination, with the only exception being the bonus icon.

There is also a freespin feature included in the game, which is triggered by two stacked reels of wild icons appearing at either end of the layout. A total of 15 freespins will be provided, and during this round reel one and five are held as wilds.

The game also included some bonus symbols, which are provided in the form of sarcophagi. Spinning three of these on to the reels will trigger the bonus round. In this round you basically need to pick one of the three icons to reveal a prize.

Riches of Ra is a great game with a wonderful base theme, and it also allows you to access a couple of speciality rounds while playing.