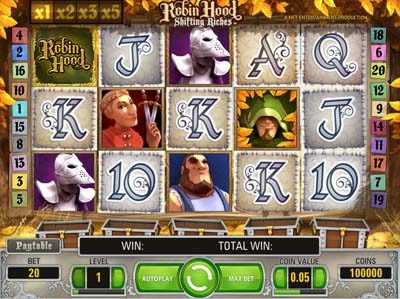 We’re all aware of the tales of Robin Hood, right? The man who robs from the rich and gives to the poor. Well, this online video slot from Netent will take you straight into the thick of the story, where you’ll join the titular character and his band of merry men in seeking out gold to give to the needy. As such, you’ll find that the reels of this game are filled with various different icons, the first of which are represented by the regularly seen A, J, K, Q and 10 symbols. These are joined by a few character symbols, including Robin Hood himself, as well as Little John, Friar Tuck and Maid Marian.

As far as the game’s interface is concerned, this is constructed of five reels and three rows, so you can be sure of playing on a familiar layout. Not only that, but Netent have also made sure to include a total of 20 different bet lines into the game, and these are fixed in place. Players do have the chance to be able to switch their wager around though, and this is done by adjusting the bet level and the coin value totals. Pushing both of these up to their maximum levels will ensure that you’re playing an overall high wager of £100 per spin.

The first and most obvious special feature of this game is its ‘Shifting Reels’ addition, and this is able to be seen every time you form a winning combination on the reels. The reels essentially shift one position to the right for a chance at extra wins. Not only that, but there’s a multiplier which increases following every shift, and this is able to move up to times five.

Alongside this, there’s a wild icon included in the game, and this is the game’s logo. As a wild, it will substitute for all other symbols on the reels in order to form a winning combination, with the only exceptions being the ‘Free Spins’ icon and the money bag icon.

The money bag icons can appear on any reel, and when they do, they’ll fall into the chests at the bottom of the screen. The location they were in on the reels before will then turn into wilds. Once you’ve collected four money bags in a chest, a freespins round will be triggered. During the freespins round, one of the character icons is selected as an extra wild. The ‘Free Spins’ symbol comes into effect during this round as well, and two or more of them showing up will activate further freespins.

This game presents a wonderful product to its players, which is feature rich and entails great game play merged with high quality graphics and animations.