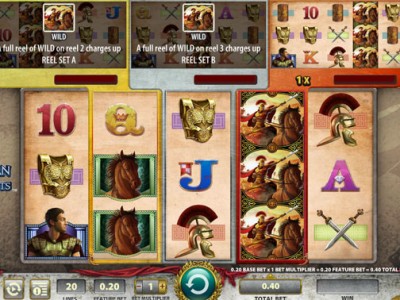 Are you ready to visit the Colosseum and be a spectator of some Roman gladiator duels? Because in Roman Chariots, that’s exactly what you’ll get to witness. The reels are filled with helmets, swords, shields, armour, and various other forms of imagery that relates to gladiator arenas. Your gameplay will be backed by the authentic sound of horses neighing, gladiators fighting and the sound of a raucous crowd.

The layout of this game is quite different to a standard slot game. There’s a main set, which has five reels and three rows, and then the middle three reels are connected to three separate miniature sets, which also contain five reels and three rows each. There’s a total of 20 paylines included, and wager can be changed between the minimum of £0.20 up to the maximum overall wager of £20 per spin. That maximum wager includes a feature bet of £10.

The game includes a wild symbol, which is that of a gladiator on horseback. This will appear on reels two, three and four of the main reel set. If it appears stacked on all three rows of any of the reels, it will charge up its respective miniature reel set by the amount of the bet multiplier.

Reel five contains various different symbols that relate to the miniature reels. These are spin, spin 2x, spin 3x, spin 5x and reset. Should any of the spin symbols appear on the fifth reel, they’ll set the miniature reels off spinning by the relative amount stated. Any winning combinations on the three miniature reels will be multiplied by the charged amount on each.

Should a reset symbol appear on reel five, this will remove the multiplier of all three miniature reels and return it to zero.

There’s also a scattered bonus symbol, represented by the chariot wheel. Two of these appearing on reels one and five will trigger eight freespins.

Roman Chariots has some great gameplay, with the potential for big wins and intriguing special features.