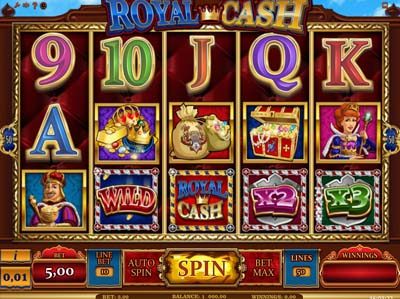 It must be quite a charming life being a part of the royal family, having access to money whenever you need it and living in the lavish palaces of the world. Royal Cash, presented to you by iSoftBet, takes you into that world, allowing you to live life like a royal during the game. Its reels are filled with several different symbols, although these begin with the regularly seen A, J, K, Q, 9 and 10 icons. They’re joined by other standard icons in the form of a stack of gold and crowns, two large, filled money bags, a treasure chest with sparkling jewels inside it. Finally, two additional icons in the form of the king and the queen are also included.

The game itself is offered up on a five reel and three row layout, meaning that you’ll have a fairly familiar interface upon which to play. There have also been 50 pay lines build into this slot and you can adjust these with the ‘Lines’ box. Players are also able to switch around the amount of the wager per spin, and this is done by altering the value of a single coin in the first instance. There, you can select a value between £0.01 and £0.50, while altering the line bet between one and 10 will give you the chance to play a maximum bet of £250.

As a part of the royal family, you’ll have some additional perks to assist you with playing the game. These start with the wild icon, and this will substitute for any other symbol on the reels in order to form a win, with the exception of the freespins and wild multiplier icons. And as far as the wild multipliers are concerned, these appear in the form of x2, x3, x5 and x10 symbols, and if they’re included in a win, they’ll multiply all of the winnings by the amount shown.

Featuring high quality graphics and entertaining game play, Royal Cash is certainly a great offering from iSoftBet and it fits nicely into their catalogue of games.