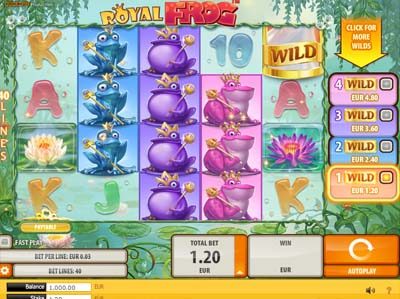 If you’ve ever been interested in playing a game that features frogs in crowns, Royal Frog is without a doubt a product for you. Featuring three different coloured frogs as well as three different coloured lily pads as standard symbols on the reels, this game is certainly full of quirky imagery, and is obviously based upon the story of the Princess and the Frog when you look at the accompanying special feature symbols.

The layout of the game is five reels wide and four rows tall. There’s also a total of 40 separate paylines included in the game. The coin value per line is able to be altered between £0.01 and £1.00, meaning that players can place a maximum overall wager of £40 per spin. However, down the right hand side of the reels, you have the option of changing the amount of wild symbols included in gameplay from one to four. Should you choose to include four, the maximum wager becomes £160 per spin.

The bonus symbol of the game is a golden flower encased in a purple bud, and spinning three of these on the reels will triple your wager and activates 10 freespins. Wild symbols are added on each freespin after the first one.

As mentioned, you can increase the amount of wilds included in gameplay, which will alter the frog symbols into either prince or princess icons, all of which act as wild symbols. These symbols are expanded wilds, which have the potential to cover an entire reel each.

Royal Frog is a unique enough game within itself, thanks to the opportunity of being able to alter the amount of wild symbols included in the game. There’s an interestingly regal-sounding piece of music that plays while you spin the reels as well, bringing together the imagery and audio features perfectly.