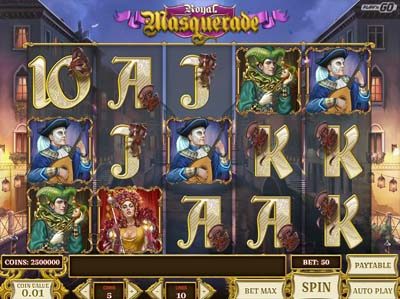 If you’ve ever been interested in attending a masquerade ball, perhaps this slot game from Play’n Go will provide you with a little bit of an opportunity. It’s actually set against a backdrop of the waterways in what appears to be Venice, Italy. The theme of this game presents you with some intriguing icons, which start with adorned A, J, K, Q and 10 symbols. There are five other symbols incorporated into the game, all of which are guests at the ball, with the exception of the first one, who is the entertainer. Accompanying him are two female and two male guests, dressed up to the nines in their finest masquerade attire.

The layout of the game is presented on a five reel and three row interface, so it’s a fairly standard affair. There are also 10 different pay lines included, but you can adjust these to suit your own personal preferences. Further to this, you can alter the wager that you place per spin, and this begins by changing the value of a single coin between £0.01 and £2.00. You can also switch around the amount of coins that you play per line between one and five. This allows all players to place a maximum overall wager of £50 per round.

Play’n Go have included a couple of special features into this game to ensure you have an entertaining time while spinning the reels. The wild is represented by the beaked masquerade mask, and if this does appear on the reels it will substitute for all other symbols in order to form a win. The only exception to this rule is the scatter icon, and if five of the wilds show up on a pay line, you’ll receive a maximum pay out of 1,000 coins.

And as far as the scatter icon is concerned, this is the large golden mask. Spinning three or more of these on to the reels in any location will trigger the game’s freespins round, with five of them being provided to you initially. These are actually known as ‘Win Spins’ and these guarantee you a win on every spin. If a scatter shows up during the win spins round, you’ll be granted an additional two on top.

Royal Masquerade is a very nicely designed game, presenting not only high quality graphics, but intriguing game play at the same time.