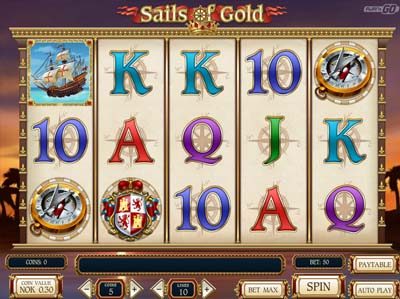 Based on Christopher Columbus’ adventures on the high seas, Sails of Gold will present you with an intriguing slot game on the whole. It’s been imbued with Play’n Go’s usual high level of graphics and you’ll need to be on the look out for new treasures. The symbols included on the reels start with the regularly seen A, J, K, Q and 10 offerings, but they’re joined by an icon of a compass, a bejewelled broach and a coat of arms.

You’ll find that the game has been designed with a total of five reels and three rows incorporated into it, so it’s the general layout of a slot machine game fon display. Not only that, but there are 10 different bet lines included alongside, but these can be customised to suit your own personal gaming preferences. You’re also able to adjust the amount of the bet that you place per round as well, which begins from the minimum of £0.01 and increases up to £1. In addition, you can use between one and five of these coins per active line, meaning that a maximum overall wager of £50 is able to be played per spin.

You’ll find that while sailing on the high seas, you might need a bit of assistance to find the treasures needed. That’s where Play’n Go have integrated one or two additional special features to the game. The feature first up is represented by the icon of Christopher Colombus himself, and he provides the wild symbol of the game. As a wild, this substitutes all other symbols to form a successful winning spin, with the only exception being the scatter icon. If five wilds appear on a winning pay line, you’ll win a maximum pay out of 5,000 coins.

And as far as the scatters are concerned, this particular icon is represented by Colombus’ ship. Three of these coming into view will trigger a total of 10 freespins. During this round, the icon of the golden ship will become active, and this provides an extra wild. Should three of these come into view during the freespins round, you’ll receive an additional 10 freespins on top.

There’s nothing ultimately out of the ordinary within this game, but it manages to provide a decent enough offering from Play’n Go.