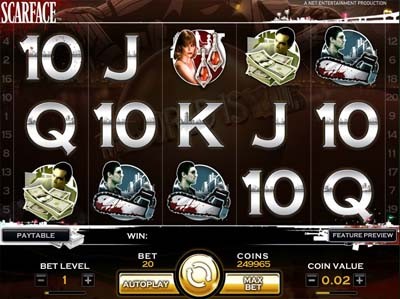 It’s a fact that when Netent collaborates with Universal Studios, the games that they produce are nothing short of extraordinary. Scarface, based on the well-known film of the same name, doesn’t stray away from this rule either. Of course, you’ll find characters from the movie appearing on the reels, such as Al Capone as Tony Montana, Michelle Pfeiffer as Elvira Hancock, and Steven Bauer as Manny Ribera, while a great piece of music will play you along as you spin the reels.

The game offers up a five reel and three row interface for players to game on, and alongside this, 20 fixed pay lines have been included. The game’s bet level is able to be changed between one and 10, while the coin value can be switched between £0.01 and £0.50, thereby allowing all players to place a maximum overall wager of £100 per spin.

The game incorporates stacked wilds into its special features, with the ‘Nudge Spin’ stacked wild appearing on reel two. Should it do this in full, a re-spin will be triggered while the stacked wild will nudge down for a chance at bigger wins.

There’s also the ‘Freespins’ stacked wild, which appears on the fourth reel. A full one of these appearing on the reel will activate a total of 15 freespins, and wins in this round are tripled. Should this appear in full on reel four during the freespins round, a further 15 freespins are credited.

Finally, the ‘Bonus Game’ stacked wild appears only on reel three, and if it does so in full, the bonus game is activated. This takes you to a shoot out with the mob, and every kill you manage to make earns you coins.

Should a stacked wild only partially appear on a reel, it will turn into a standard wild, substituting all other icons on the reels to make a win.

Scarface brings players all the thrills of the film with the excitement of a slot game, presenting a game that is thoroughly entertaining.