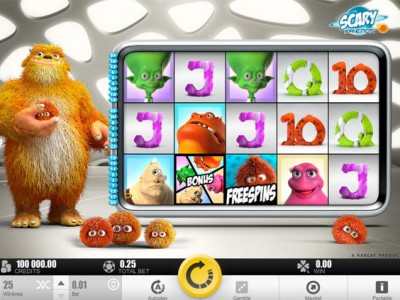 Scary Friends, a game offered up by Rabcat, provides an ultimately wacky product filled with alien creatures. The supposed scary friends don’t appear scary at all. In fact, one could suggest that they’re completely cute, making odd, but endearing noises every time you spin the reels into a winning combination. Alongside the standard 10, J, K and Q symbols, you’ll find an orange, a green and a pink alien as icons, as well as a cyclops and a furry monster.

The game itself provides five reels and three rows worth of a layout, and a total of 25 paylines have also been included. Should you be so inclined, you can alter the amount of active paylines. The game’s coin value is able to be changed between £0.01 and £2.00 per payline, offering up an overall maximum wager of £50 per spin.

The furry monster acts as this game’s wild symbol and will fill in for any other symbol on the reels to create a winning combination. The only symbols that aren’t replaced are bonus and freespin icons.

Finally, the symbol featuring four of the aliens represents the bonus symbol, and three of these scattered across the reels triggers the bonus feature. This provides a two-stage, interactive point and click game, which sets the aliens off in monster training mode. You need to select the monster that you think will win the training round, and its finishing position will determine the payout you receive.