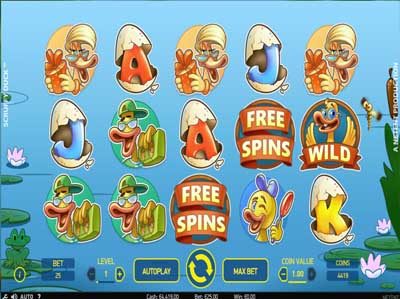 If you’d like to feel like a kid again and try something straight out of one of your favorite childhood cartoons, you might want to consider Netent’s Scruffy Duck slot game. The theme and graphics are ridiculously cartoonish and even the soundtrack contributes to preventing you from taking this game seriously. As you can tell from the title, the theme centers on ducks. Thus, the lower value playing card symbols appear to be the youngest ducks that have barely hatched from their eggs. They include A, K, Q and J. Following those is a family of four ducks: the youngest, holding a lollipop and wearing a blue cap. Then there’s the older brother – a teenager, following whom are the mother and father ducks. The latter is also the highest paying symbol on the reels. 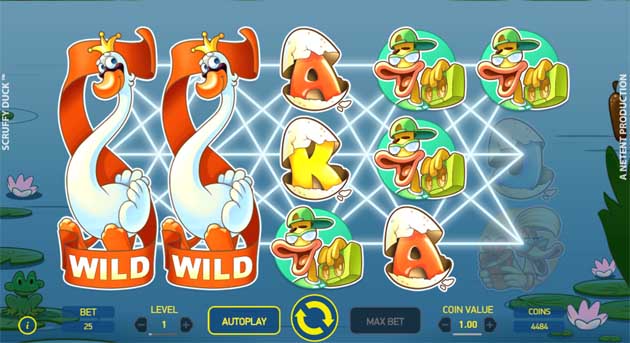 The layout features five reels, three rows and a total of 25 paylines. The paylines aren’t subject to adjustment, however, you may regulate bet level and coin value. Thus, the stake range spans from 20p up to £250 per spin, and the RTP is a satisfactory 96.38%.

Despite appearing rather boring and childish at first glance, this game actually offers a few attractive special features. First up is the Expanding Wild feature, which can cover an entire reel, offering greater winning opportunities. This way it can replace any and all of the regular symbols and help create winning combinations. However, it cannot substitute for the game’s Freespins symbol. But do note that the Expanding Wild is present in both the base game, as well as during the freespins bonus feature.

And now for the main attraction: the freespins feature. In order to trigger it, you will be looking to land 3 Freespins symbols at a time. This symbol can only appear on reels 3, 4 and 5. Once you land those symbols, you will enter a pick me game, in which you will need to pick a duck. The duck of your choice will reward you with one of the five available features. 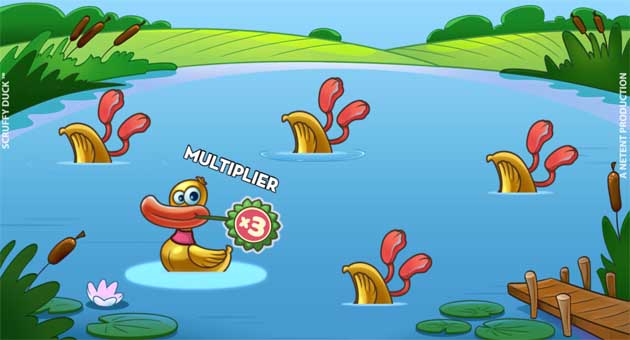 The first feature is the Multiplier, which will grant you 15 freespins with a 3x multiplier. If you’ve activated the Symbol Removal feature, it will grant you 12 freespins, whereas the lower value playing card symbols will not be present. The Random Wilds feature, on the other hand, will give you a total of 8 freespins and will add anywhere from 2 to 5 Wilds after each of those spins. Following these is the Colossal Wild feature, which will award you 10 freespins. The special gift here is the 2 by 2 or 3 by 3 Colossal Wild symbol on reels 2, 3 and 4.

Last but not least is the Double feature, which will give you 6 freespins and two of the other features. The features will be chosen at random.

Scruffy Duck isn’t as visually rewarding and exciting as one might expect. Especially given that this is a Netent game, expectations were certainly higher. But those bonus features do tend to make up for it. We would classify it as a medium to low variance slot and the RTP is as mentioned decent (96.38%). What you are really hoping for in this game is the Double Feature bonus, it is here that the best potential lies. If you for instance get awarded the symbol removal and random wilds, you are almost guaranteed a good win. In our experience the free spins feature triggers quite often, but you will probably have to give it some spins to get the Double Feature bonus.