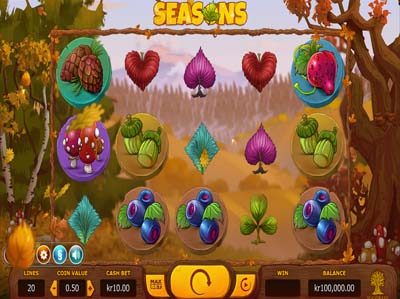 The changing of seasons is a great idea for a theme to base a slot game on, and that’s exactly what this offering from Yggdrasil Gaming does. It features a snow-covered background, and whenever you aren’t spinning the reels, you’ll have the sounds of a bitter chill in the air coming through your speakers. As far as the reels are concerned, this is where you will find the game’s icons, and then exist initially in the form of playing card suits which are designed like foliage. You will also see five other standard icons, which are presented as some toadstools, a pair of acorns, a couple of pine cones, a strawberry and a few blueberries.

The general gaming interface offers players up a layout of five reels and three rows, and you’ll also find that the slot has 20 different pay lines incorporated into it as well. Gamers will find that the pay lines are fixed in place, but you do have the option of adjusting your coin value between its minimum of £0.01 and its maximum of £5, and this will allow you to place a maximum overall bet amount of £100 per spin. This level can be reached instantly by using the ‘Max Bet’ button.

What’s great about this game is that it offers up some unique and intriguing specialities. For example, it’s wild icons. There are four in total, although you’ll only have one in play at a time. The game itself has four modes – winter, spring, summer and autumn – and after 10 rounds are played in a season, the layout may change to a new season. The wild change accordingly, with the winter hare wild, the spring owl wild, summer deer wild and autumn fox wild symbols being offered up.

Each of the wilds offer up a different feature, along with the standard ability to stand in for any other icon on the reels to form a win. Meanwhile, the spring owl wild provides you with a re-spin of the reels and the summer deer wild expands in a cross pattern if it appears. Finally, the autumn fox wild will award a random multiplier of up to times 10.

Finally, a freespins icon exists in the game, with three or more coming into view triggering the round of up to 30 freespins.