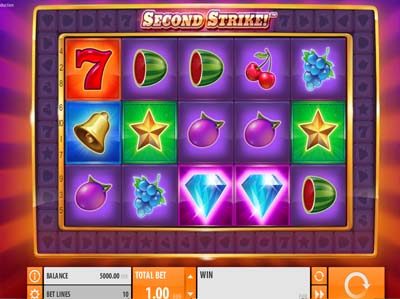 Second Strike presents you with a game that takes all of the delights of a classic slot game and merges it almost with some kind of 90s television game show. It’s actually quite an appealing offering from Quickspin on the whole. Due to it featuring some of the best traditional slot additions, there are icons on the screen to represent such products, including one of cherries, a plum, a bunch of grapes and half a watermelon. These are joined by four additional symbols of a bell, a golden star, a number 7 and a blue diamond.

The main layout of the game is presented to you on five reels and three rows, and Quickspin have also included a total of 10 different bet lines as well. You cannot adjust the amount of pay lines that are in action, but you do have the chance to switch around the amount of the wager that you play per spin. This is done by using the up and down arrow buttons to the right hand side of the ‘Total Bet’ box, or you can click on the box itself to bring up a list of available wagers. You’re able to choose from a range of between £0.10 and £100 here.

The game doesn’t have an exceptional amount of speciality additions included in it, but the ones it does have start with a wild icon. This will substitute for all other symbols on the reels in order to form a winning combination. This will only appear on the main game screen and not only the outer wheel interface.

And speaking of the outer wheel, you will see this surrounding the main gaming interface. This is where the second strike feature will come in to play. Any time you form a winning combination this feature will add between six and 10 extra symbols to the game and will increase your chances for winning spins.

Second Strike is a nicely designed game, although it might seem a little confusing initially, thanks to its secondary wheel. However, once you’ve played through it a few times, you’ll definitely be able to appreciate its theme and game play.