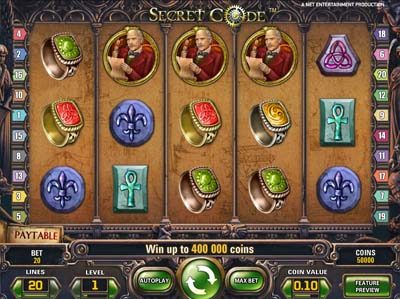 For a game based on the wonders of hidden secrets and mysteries surrounding the Illuminati, Secret Code from Netent should be just the product to suit you. You’ll be provided with a very Gregorian type of chanting in the background as you spin the reels, which are decked out with various different thematic icons. These exist in the form of different symbols, such as the ankh and fleur de lys, as well as three different ornate rings. Four other standard symbols have been added alongside these, and these are the magnifying glass over an ancient book, an hour glass with sand running through it, and both a female and a male explorer.

The layout of the game is quite regular, featuring five reels and three rows. The developer has also included a total of 20 separate pay lines as well, although if you have a preference for altering these, you can do by using the ‘Lines’ arrows. Further adjustments to the game can be made by changing around the wager you place, and this is done by changing the bet level between one and five, as well as by altering the value of a single coin. This has a range of between £0.01 and £0.50, so your maximum overall wager in this game stands at £50 per round.

This game has quite a few specialities integrated into it, and this begins with its wild icon, which is represented by the hooded man wielding a dagger. He will act as a stand in for any other symbol on the reels, with the exception of scatters and bonus icons, in order to form a win. Wilds on reels two, three or four will expand to cover the entire column when forming a win.

As far as the bonus icon is concerned, this is the key in the lock, and when this shows up on reels three, four and five in any location, the bonus game is triggered. This sees you presented with five keys and five boxes, which are held by five statues. You need to match keys to their boxes, and doing so correctly will see you rewarded with coin wins.

Finally, the scatter icon of this game is represented by the symbol with the letters ‘XORNSTO’ written on it. Three or more of these showing up in any location will activate the game’s freespins round. In freespins, two or more scatters showing up will increase the multiplier of the round, and any wins formed pay the line win amount multiplied by the multiplier, which is between one and 20.

When it comes to games with great themes, Secret Code is definitely one of them. It’s also very nicely designed, featuring rich graphics, and its special features are very nicely incorporated as well.