Secret of the Stones 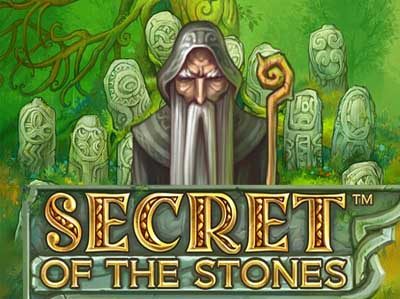 Secret of the Stones slot review

Secret of the Stones is an online slot game by online slots provider Netent. It has a distinct Celtic vibe to it and takes you to a different time and age. There’s a very peaceful, chiming soundtrack playing in the background to give you a better feel of that era. If you look close enough, you can actually tell that the backdrop is implying you’re at Stonehenge. And as we all very well know, this significant landmark was used as an ancient observatory and is to this day still shrouded in mystery, drawing thousands and thousands of people to itself each year. We really like the sound effects that are audible when you spin the reels, too. You can literally hear the heavy stone mechanisms turning and then – the massive blocks of stone reels fall into place. 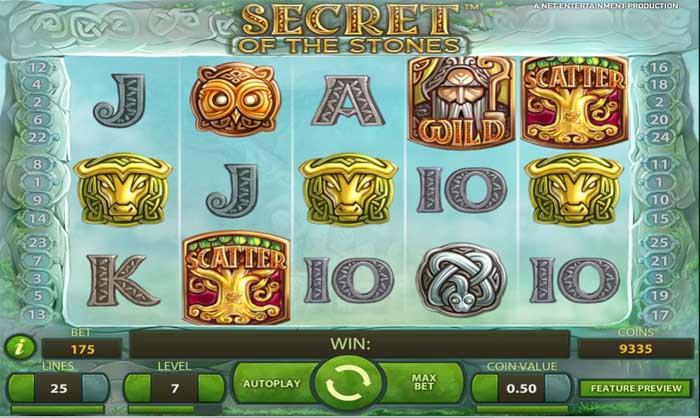 The symbols here are all also made of stone and appear to be woven out of Celtic knot work. First in line are the grey lower value playing card icons. These include the symbols A, K, Q, J and 10. And following them, we have a number of different animal representations for the higher value symbols. Starting with the snake icon, the payouts increase for the wolf symbol. Then we have the golden bull, following which is the mysterious brown owl icon. And last but not least, the deer is the most lucrative icon present, offering payout of up to a whopping 1,250 coins for a winning combination. As for the layout, it features the common grid of 5 reels and 3 rows, with 25 available paylines. You are free to adjust the paylines, if you wish. Betting amounts are also rather flexible, starting at a minimum of 25p per spin (if playing with all 25 paylines). And the maximum total amount you will be able to wager per single spin is £125. In addition, you can count on a very decent average RTP of about 96.7%.

Secret of the Stones special features

Secret of the Stones features a total of 2 special symbols. And the first of them is the game’s Wild. It comes in the shape of an old druid, cloaked and carrying a long staff. It can appear anywhere on the reels, in any position at any time during gameplay. However, it doesn’t offer any payouts of its own, unlike the regular symbols. Then again, it will be able to replace any of those symbols when it appears. And in doing so, it will be providing an additional winning opportunity. There is also one exception as to the icons that the Wild will be able to substitute for – the Scatter symbol.

The Scatter, in turn, comes in the form of the Tree of Life and can also appear anywhere on the five reels. Furthermore, it will also not provide you with any payouts. Instead, the Scatter is here to trigger this game’s one special feature – the freespins bonus round. And in order for you to activate it, you will need to land a minimum of 3 Scatter symbols all at the same time during a spin. As a result, you will receive a total of 10 freespins. That number remains indefinitely, regardless of how many Scatters you will land. But that doesn’t mean you won’t want to land more of this special symbol. 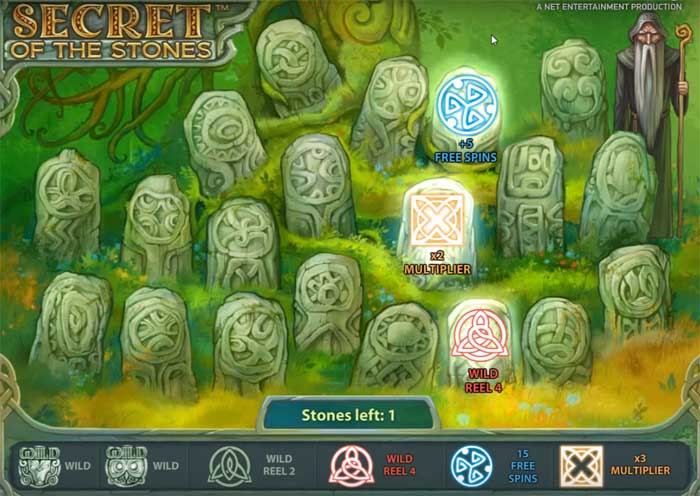 The number of Scatters you land will actually be equal to the number of picks you get, before the freespins begin. Once you trigger the feature, you will enter a new screen with a selection of different stones. Pick 3, 4 or 5 of them – depending on how many Scatters triggered the bonus. And these can reveal various extras to enhance the bonus feature. For example, you can increase the number of freespins by 2, 3, 4 and so on – up to 10!

In addition to that, you can also increase the freespins multiplier value by 1x or 2x, which certainly wouldn’t hurt either. Moving on, you can also gain a fully Wild 2nd or 4th reel. Better yet, you can even get both of those reels to become fully Wild for the duration of the entire freespins round. In addition to that, players can also benefit from the deer and/or owl stepping in as an extra Wild symbol or symbols. And remember, those two are the most lucrative icons on these reels. 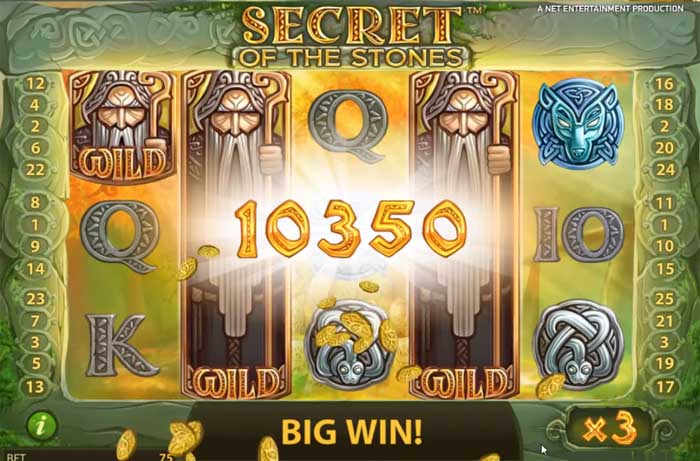 Secret of the Stones is a compelling Netent title, with a variance that exceeds the norm for this developer. It lands somewhere in the medium to high variance range, with higher payouts obviously coming from the bonus feature. So, be sure to land as many Scatters as you can and get a hold of more extra features. The dream setup in this slot is to pick wild reels two and four, and an extra multiplier. With that setup you are guaranteed a big win on almost all of your free spins, but other combinations can pay out big as well. In our opinion this is one of the best slots NetEnt has released and it is still a hugely popular game among a lot of players.