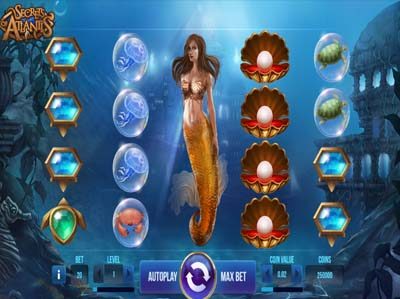 Secrets of Atlantis is probably the most relaxing slot you’ll play this year (barring all the excitement around any potential big wins). The basegame is pretty un-spectacular, so to speak, about fair to middling, but the game shines when it comes to bonus rounds. These are not only triggered fairly often, but they can also yield nice hits.

In a nutshell, what you get in Secrets of Atlantis is a high RTP slot (97.07%), with 5 reels, 4 rows and 40 paylines. Coin range varies from £0.01 to £1, and the minimal amount you may bet per spin and per line is 1 coin, with max payout per line being 400 times your stake. A minor gripe, especially for slot veterans, would be that there is no traditional freespin feature per se, but rather two things called Colossal Symbols Respin and Nudge Wild, which we’ll discuss presently.

Special Features
To cover the basics – Secrets of Atlantis features what one might expect from a maritime-themed slot – a crab, a turtle, a jellyfish, as well as gem versions of these creatures (a ruby for the crab, an emerald for the turtle and a sapphire for the jellyfish). There’s no scatter, as there’s no freespin round, and, interestingly enough, there’s no traditional wild, but rather Nudge Wild in the form of a mermaid (not Ariel, mind you). The icons appear across transparent reels, against a backdrop of seafloor and ruins of Atlantis.

One of the things you’ll notice right away is that some of the reels are highlighted with bubbles. This is the unimaginatively, although aptly named Highlight feature, and it is responsible for triggering the Colossal Symbols Re-spin. Namely, during every spin, reels two, three and four have a chance of being highlighted. Now, if all three are highlighted once the reels stop, this triggers the re-spin, giving you one measly freespin. Here’s the difference, however – the symbols are, for lack of better word, colossal, with one symbol covering all three reels and four rows. This, effectively means twelve of whatever symbol landed fully (and they do land fully most of times); should they match the symbols on reels one and five, this may mean a hefty prize.

We also mentioned the Nudge Wild. This is, basically, akin to an expanding wild. If the mermaid (wild), which occupies all four rows on a reel, appears only partially, it has the potential of being nudged up or down to fill in the reel entirely. If it happens to drop by on a Colossal Symbol Re-spin, it will be nudged to cover reels three through five, guaranteeing a hit.

Summary
Secrets of Atlantis from NetEnt is nothing really out of the ordinary, and it’s pretty much in the upper-middle class by popular vote. Still, the setting is quite serene, there are nice hits to be had in the bonus round, and best of all, freespins will trigger fairly often. Basegame hits can also be decent, but they do occur less often. On the other hand, if you factor in the bonus features, you can walk away with 3200 times your stake per single spin. We would give this slot 4 out of 5 stars.