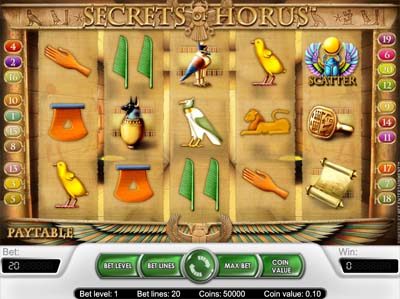 You’ll be able to take a trip back to the times of Ancient Egypt in the slot game entitled ‘Secrets of Horus’ from Netent. Yes, we know it’s been done by many different software developers, but Netent has a knack for being able to do such things better. As such, this game presents you with icons which are all dedicated to the idea of Egypt in ancient times, so you’ll get to see imagery of hieroglyphics in the form of reeds, chickens, hawks and the sphinx, amongst others. And joining these are five higher paying symbols, which are of an old scroll, a sarcophagus, a ring imprinted with hieroglyphics, a bird of some sort, and the eye of Horus.

Gamers will also be able to see that the layout of this one is presented as a five reel and three row offering, meaning that it’s something familiar for regular players. The total number of pay lines included stands at 20, although these can be customised by using the ‘Bet Lines’ button to your preferences. Altering around the wager you place per round is also able to be done, and this is changed via the ‘Coin Value’ button in the first instance. This has a range of between £0.02 and £0.50 per line. Secondly, you can utilise the ‘Bet Level’ button to change this between one and four. Therefore, a maximum overall wager of £40 per spin can be placed.

There’s the inclusion of a wild icon in this game, and this is represented by Horus himself. As a wild, he will stand in for any other symbol on the reels in order to form a winning combination, with the only exception being scatter icons. Any wins featuring this symbol will also provide you with a double pay out, while five of them showing up on a pay line will reward you with 10,000 coins as a maximum pay out.

The scatter symbol of the game is that of the scarab beetle, and you’ll need to spin at least three of these on to the reels in any location in order to activate its special feature. A total of 15 freespins will be provided to you for three or more scatters, and any wins formed during this round will provide you with triple the pay out.

We’re definitely fans of games which incorporate historical cultures into their themes, so this offering from Netent is a great one for us. We’re sure you’ll enjoy it thoroughly as well.