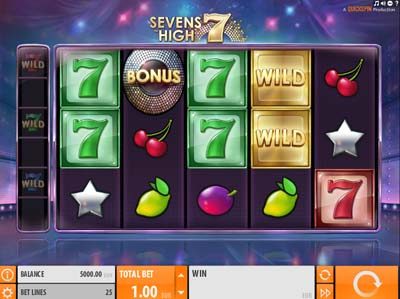 Loading up the Sevens High slot game from Quickspin is almost like being transported to a dance club, with the sound of electronic, almost psychedelic tones accompanying your gameplay. The reels are filled with classic slot machine symbols, so you’ll find icons of cherries, lemons, plums, oranges, stars, bells and, of course, 7s.

The game has a standard five reel and three row layout, while a total of 25 paylines have also been included in the product. These aren’t customisable, but you do have the chance of altering the total bet placed between the minimum of £0.25 and the maximum of £100 per spin. This alters the coin value per line from £0.01 up to £4.00. A fast play feature can also be activated, which spins the reels quicker and provides faster gameplay.

During the main game, any winning combinations created will activate the wild meter, which can be seen at the left side of the reels. Every two consecutive wins turns a 7 symbol wild, of which there are three, a blue, a green and a red. The feature ends when a new winning combination isn’t crafted.

Bonus symbols are represented by a diamond-studded record, and three of these scatters always pay three times the total bet placed, and activate 10 freespins. Three bonus scatters in the freespins round will award a further 10 freespins. The wild meter feature is also active during freespins and will also grant +2 freespins for a maximum of six extra freespins.

Sevens High can initially provide a headache with its thumping soundtrack. However, the gameplay and special features of this product make for a compelling and entertaining game.