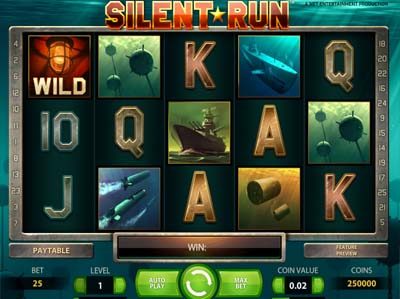 Ever wondered what life on a submarine would be like? Well, we have. But, thanks to the Silent Run online video slot game from Netent, our wonderment has been satisfied. This one takes you right under the ocean, providing you with all the inclusive sounds of being on board a vessel. Alongside this, you’ll find that there are several interesting icons included on the reels. These begin with the regularly seen A, J, K, Q and 10 symbols, while five other symbols are offered in the form of underwater mines, torpedoes and explosives, as well as a destroyer ship and finally, a submarine.

When you’re ready to play Silent Run, you’ll find that there are five reels and three rows worth of an interface available. This is, of course, a fairly regular layout for a slot game, and Netent have added a total of 25 different pay lines as well. These are fixed in place, but players can adjust the amount of the wager they place per spin by altering the bet level and the coin value sections. This offers up a range of between £0.25 and £125 altogether, and this amount can be reached by simply using the ‘Max Bet’ button.

A slot game with such an interesting theme should also have some intriguing special features, and this one does not disappoint. This begins with the echo wild symbol, and this is represented by the orange sonar screen. Should this appear anywhere on reel three, it will send out three sonar signals to locate hidden wilds. Once this has happened, the wilds will substitute for other icons in order to form winning combinations, with the exceptions being echo bonus and echo wilds.

There’s also the echo bonus icon, which is represented by the green sonar screen, and if this shows up in any location on the third reel, you’ll see it send out three green sonar signals to search for torpedoes. Between two and five of these will be located, and following on from this, you’ll get to play the bonus game. Here, you’ll need to choose an enemy ship to fire your collected torpedoes at. Each ship that you torpedo will provide you with a different win amount.

War games on the whole aren’t especially interesting for us, but this one is actually the exception. That’s due to its authentic sounds, high quality graphics, and of course, the entertaining special features included within.