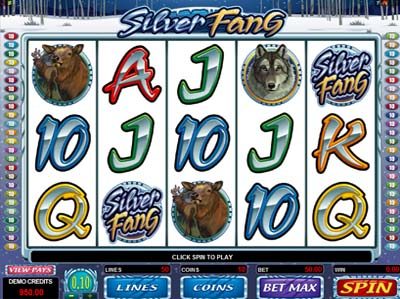 Relating to the magical wolf, Silver Fang puts you right into the centre of the action, providing you with not only an interestingly themed game to play, but a wonderful soundtrack playing in the background as well. While the product is based on the wolf, and as a consequence does feature quite a few icons in the shape of the animal, there’s also a symbol in the shape of an elk, which supposedly denotes the wolf’s prey. All other symbols are made up of the standard slot images of A, J, K, Q and 10. However, all of the game’s icons are wonderfully animated whenever they appear in a winning combination.

There’s a total of five reels and three rows available in this one, while 50 pay lines have also been included. These lines can be customised to suit your own personal gaming requirements, as can the coin value that is included. This can be switched between its minimum of £0.01 and its maximum of £0.05 per active line. You’re also able to change the amount of coins you wager with as well, allowing you the chance to play between one and 10 coins. Therefore, a maximum wager of £25 per spin can be played.

The howling wolf icon provides Silver Fang with its wild symbol, and this will substitute for all other icons on the reels to create a winning combination, with the only exception being the scatter. The wild symbol is stacked during the game’s freespins round.

The paw print in the snow is what offers up this game’s scatter symbol, and three, four or five of these showing anywhere on the reels will win you 15 freespins, with the round also including a five times multiplier alongside.

As with the majority of Microgaming products, there’s also a gamble feature integrated to allow you to double or quadruple your wins in the base game.

This game has a great theme behind it, and Microgaming have done a nice job of pulling everything together in this one. A bonus round would have been nice, but players will have to make do with the freespins and stacked wilds.