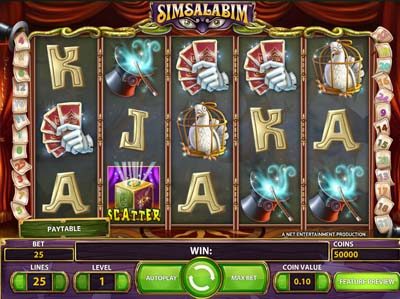 Any game that has an infusion of magic in it is ultimately something we’d want to play, which is why Simsalabim from Netent is one of our favourites overall. In it, you’ll be transported right to the front of the act, ensuring that you never miss one of the tricks being performed. The reels are filled with magical icons, and these include such symbols as the top hat and magic wand, the hand clutching on to some playing cards, the bird trapped in a golden cage, and the escape artist’s trunk wrapped up in chains. Not only that, but your game play will also be accompanied by a circus-like soundtrack, offering you an altogether realistic experience.

Five reels and three rows make up the general layout of this one, and Netent have also added a total of 25 separate pay lines to it as well. However, if you’re the kind of player who enjoys selecting the amount of lines you’d like to wager on, you can customise the bet lines in Simsalabim to suit your own needs. Furthermore, you also have the chance to adjust the amount of the wager you place per spin, and this is done by first of all changing the value of a single coin. This offers up a range of between £0.01 and £1 per active line. In addition, you can change the bet level between one and 10, and these features being pushed to their highest levels provide a maximum wager level of £250.

It stands to reason that a video slot based on the magic theme will have some ideal special features, and this one doesn’t lack in that area. First of all, you’ll see that the hypnotist icon acts as the wild symbol in the game, and as a wild, it will substitute for all other symbols on the reels in order to form a winning combination. The only exceptions to this are the scatter and bonus icons.

And speaking of the scatter, this is represented by the magical cube. Three or more of these showing up on the reels in any location will trigger the freespins round, with 10 freespins being provided for three scatters, 20 being given for four scatter icons, and 30 freespins for a total of five showing up. Wins during this round are also tripled.

Finally, the white rabbit wearing the top hat and clutching on to the wand is this game’s bonus icon. Three or more of these showing up in succession on an active bet line will trigger the bonus game. This sees you presented with multiple top hat, and you need to click on them with your magic wand in order to reveal the prizes within.

If there was ever a theme that we enjoy, it’s this one, and Simsalabim does a great job of integrating all the mystery and wonder behind magic into its reels. The RTP  of this slot machine is at an impressive 97.50%.