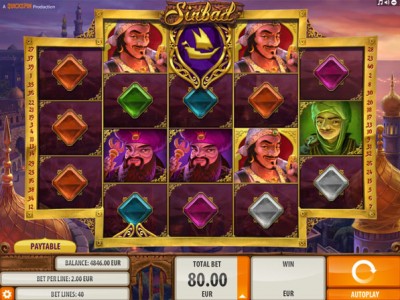 Sinbad’s Voyages have become some of the most known stories told, and now you can experience those stories as part of the slot game, Sinbad. The game features symbols of various members of Sinbad’s voyages, including the veiled woman and a variety of additional warriors. Your gameplay will also be accompanied by an authentic-sounding Persian soundtrack, as well as vivid scenery and appealing graphics.

The game has a unique layout as well, which still features five reels, but has 3 x 4 x 4 x 4 x3 rows. There are also 40 different paylines, and the total bet is able to be altered between £0.40 and the maximum of £80 per spin. Should players not wish to see the reels spinning as much, a fast play option is also available.

Anyone playing Sinbad will have the chance to view some interesting extra perks as well. These start with the wild symbol. Now, most slot games have wild symbols in them, but Sinbad has incorporated its wilds as stacked symbols, providing more chances of winning combinations. These substitute for all other symbols apart from freespins scatters, diamond scatters and snake wilds.

Sinbad’s ship is the freespin scatter symbol, and three of these will trigger the freespins round. The amount of freespins received are determined by clicking on one of the scatter symbols. If you pick out the Ape, you’ll be given seven freespins and any time the symbol appears again during freespins, it provides a sticky wild. Picking out the diamond will give you 10 freespins and during which, you need to collect the diamond progress scatter symbol. This will turn regular symbols into wilds. Collecting seven diamonds will provide two extra freespins, while another two will provided for 11 diamonds. Finally, picking the snake gives you 12 freespins and the snake symbol will then allow a snake to slither between symbols in freespins, leaving wilds wherever it touches.