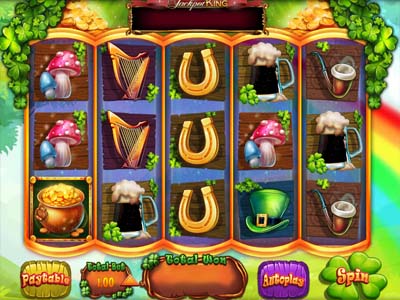 Slot O Gold is yet another Irish themed slot game by software provider Blueprint Gaming. Irish themes are a dime a dozen in the world of online gambling and pretty much all of them feature all of the most well-known stereotypes related to Irish culture: four leaf clovers, leprechauns, pots of gold and… the famous Irish dry stout. However, this slot has a very charming, neat feel about it with its pleasant cartoon graphics. There’s a jolly soundtrack that doesn’t get on your nerves, as well. As for the backdrop, it takes you to a fairytale land of rainbows and lush greenery. The reels picture a four-leaf clover, pipe, mushrooms, horseshoe, stout, harp, a leprechaun hat and the notorious pot of gold.

The layout is rather standard with 5 reels and 3 rows. There are 10 paylines in total, where all wins pay both ways. Betting amounts range from a comfortably low 20p per spin up to £500 per spin, but watch you because the RTP here is on the lower end at 92.49%.

Slots O Gold isn’t exactly bustling with special features and the Wild is actually more than just a Wild symbol. It appears in the form of the leprechaun, of course. However, you will only catch it on the middle reels 2, 3 and 4. As a Wild symbol, its Wild duties include substituting for any of the regular symbols on the reels to help create winning combinations.

But in addition to that, if you happen to land a Wild symbol on any of those reels, it will expand to cover that entire reel. Furthermore, it will also trigger the so-called Rainbow Respin. During this respin, the Wild will remain stuck in place, whereas the rest of the reels spin. If you happen to land another Wild symbol during that respin, it will trigger an additional respin and both Wilds will remain in place. Thus, you can potentially cover all three middle reels with Wilds that will stick in place for a final respin.

Look out for the Rainbow Gold symbol, as well. It can appear anywhere on the reels and when it does, it will reveal a random symbol for bigger wins! In addition, you can also take a swing at the progressive jackpot while spinning the reels here. In order to do so, you will be looking to land five Jackpot King symbols at a time. This will provide you with a new set of reels, where you will need to collect 15 crown symbols. Finally, this will reveal the Wheel King, which you will need to spin, in order to receive a big multiplier or win the jackpot.

Slots O Gold is a very pleasant slot game that is both easy on the eye and has a fun feel to it. True, it does lack variety in its bonus features and gameplay may seem overly simplistic. But don’t let that fool you, as it tends to suck you in.