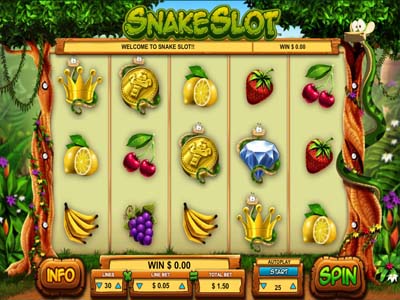 The Snake Slot game offers up a five reel and three row slot, which appears to be set within some kind of forest or jungle. The reels are filled with classic slot machine symbols, including lemons, cherries, watermelons and grapes, as well as some new additions, such as strawberries and bananas. Alongside this, you’ll find both a golden coin and a crown, both of which have a green snake wrapped around them. Every spin of the reels will be watched on by a larger green snake, who is wrapped around a tree to the right of the reels.

There’s a total of 30 paylines included in the game, although these can be altered to suit your own personal betting preferences. In addition, you’ll be able to change the line bet from the minimum of £0.01 up to the very maximum of £0.50, which will provide all players with the chance to place a maximum wager of £15 per spin. An autoplay feature is also included to allow up to 100 consecutive spins of the reels.

The icon of the green snake by itself is the game’s wild symbol, and this acts as a stand in for any other symbol, with the exception of the bonus symbol, in order to create a winning combination on a payline.

The ‘Snake Lucky Line’ symbol appearing on reel five will trigger the corresponding bonus feature, and awards a default prize of two times your total bet placed. Then, a random payline with a fixed wild symbol in the first position is turned on, and the reels re-spin twice over.

There’s also a freespins bonus round, which is trigger by three freespins symbols appearing on reels three, four and five. This symbol is the snake with a gold star behind it. A total of ten freespins are provided, and a further 10 freespins can be claimed by spinning three more of the freespins symbol during the round.

Finally, three bonus symbols (the snake with a selection of fruit behind it) appearing on reels one, three and five will trigger the ‘Jungle Party’ bonus round. Here, you simply need to select fruits for the snake to eat, and all bonus wins shown are multiplied by the total wager placed.

Snake Slot is a gripping game with a plethora of added features, all of which bring their own form of excitement and fun to the product.