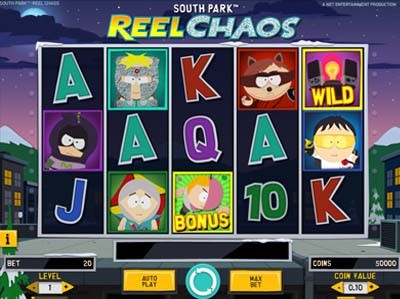 Building on the success of the original South Park slot, ‘Reel Chaos’ brings an altogether alternative version of the popular animated TV show to your screen. Of course, the reels are filled with the characters from the series, but they’ve all been transformed into superhero versions of themselves. And as you play your way through this game, you’ll be accompanied by a very apt piece of dramatic music that sets it off to a tee.

Five reel and three rows make up this game’s interface, and a total of 20 pay lines are active constantly throughout. Players can alter their wager by either adjusting the bet level up from its minimum of one to a maximum of 10, and by changing the coin value between £0.01 and £0.50 per line. This gives an opportunity to place a maximum overall wager of £100 per spin.

The game includes wild symbols, and these can appear anywhere during the main game, substituting for all symbols, except bonus icons, to make a win.

There are also several randomly activated special features, starting with ‘Cartman’s Stacked Wilds’. This sees Cartman try to catch “General Disarray”, and as he climbs up and down the reels to do so, he leaves a trail of stacked wilds behind.

‘Kenny’s Multiplier’ sees Kenny and Professor Chaos duking it out during a spin, and a random line win multiplier of up to times five is awarded.

‘Stan’s Multiplying Re-Spin’ comes into effect at random after a spin with no win, and the reels will be re-spun until a win does occur, and for every re-spin until it reaches a win, a multiplier of up to 10 times increases.

And ‘Kyle’s Overlay Wilds’ features Kyle clearing the reels of evil minions, creating between three and five overlaying wild icons in the process.

Finally, if you spin three bonus symbols anywhere on reels one, three and five in the main game, you’ll trigger the ‘Mintberry Crunch Epic Bonus Spins’. Mintberry Crunch ends up fighting up to four enemies. You need to win to survive and fight them all, with a victory bonus being presented to you if you do.

This game is cram-packed with special additions and is able to be played for hours on end without getting boring.