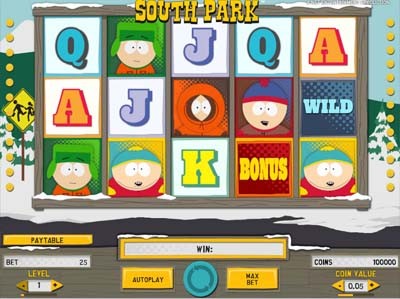 Opening with a video package that shows Kenny pulling the lever of a slot machine, and in the process being crushed by said machine before coins spill out from it, you can guess the kind of fun and games you’ll have when participating in a few rounds of the South Park slot from Netent. All the characters from the show are integrated into the game as icons, so alongside the aforementioned hooded Kenny, you’ll find Cartman, Stan and Kyle, while the remainder of the symbols are made up of standard A, J, K and Qs.

Playing the game presents you with a standard five reel and three row layout, while a total of 25 fixed pay lines have been added to place wagers on. Speaking of which, you’re able to alter the game’s coin value up from £0.01 to £1.00 per line, while the bet level is also adjustable from one to 10. Altogether, a maximum wager of £250 per spin can be placed by participating players.

Regular wild symbols in this game can make an appearance on any of the reels during the main game and in the bonus spins round. These will act as a stand in for any other icon to make a win, except bonus symbols.

Two regular bonus symbols appearing anywhere on reels three and four only at the same time as a character bonus symbol appearing on reel five will trigger a bonus game. This is determined by which character appears on the fifth reel.

The ‘Kyle Bonus Spins’ round awards you with 10 freespins, and if the Ike Wild symbols appears on reel five during this round, Ike will land randomly on one of the tiles below the reels to activate one of the features, which include multipliers, extra freespins or coin wins.

The ‘Kenny Bonus Game’ requires you to guide Kenny safely through three different zones, each containing various obstacles and wins.

The ‘Cartman Bonus Game’ sees you needing to select from one of eight different bushes to reveal coin win, double up, reset, or warning/game over.

The ‘Stan Bonus Spins’ provides you with sticky wilds on reel three, which remain there for two spins, and this round continues as long as there is a sticky wild in view.

In addition, there are three mini features, known as ‘Terrance and Phillip Mini Feature’, ‘Mr Hankey Mini Feature’ and ‘Cartman Mini Feature’, which each provide various patterns of wilds onto the reels.

If there was ever a game that is filled to bursting with special features, South Park is the one! It’s a great product with more than enough entertainment value to it.